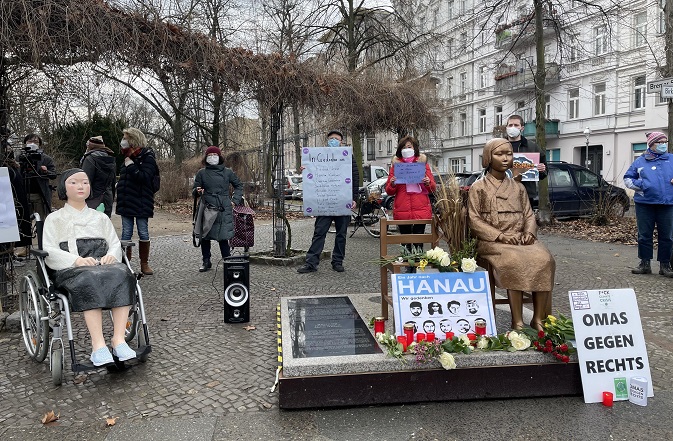 Activists and citizens hold a rally in front of the Statue of Peace in Berlin on Feb. 19, 2021. (Yonhap)

SEOUL, Feb. 22 (Korea Bizwire) — Elderly women in Berlin are once again stepping up to protect the Statue of Peace.

Omas Gegen Rechts, a German civic group, held a rally in front of the Statue of Peace in the German capital on Friday (local time), joined by some 50 senior women and Koreans.

The group held a memorial ceremony for 10 victims killed in a shooting spree caused by a right-wing extremist in Hanau, Germany, last year.

Omas Gegen Rechts is a civic group active in Germany and Austria. They are primarily led by senior female members, who have been holding rallies to protect the Statue of Peace in Berlin.

Han Jeong-hwa, head of the Korea Verband responsible for installing the statue, made a speech during the rally, thanking those female seniors for “allowing the Statue of Peace in Berlin to become a place that tells us of unjust acts that happened in the past, and to remember them.”

Renate Christiansen, an activist from Omas Gegen Rechts, said the statue is “a symbol of peace that denies all forms of violence, a perfect place for us to hold this rally today.”

Christiansen said the group will hold rallies the third Friday of each month to call for the statue to become a permanent installment.

Berlin’s Mitte district, holding jurisdiction over where the statue stands, is giving a lukewarm response as they are withholding discussions on the statue’s permanent installation.

Asked on a controversial paper written by Mitsubishi professor of Japanese Legal Studies at Harvard Law School J. Mark Ramseyer, describing Japanese sex slaves as ‘voluntary prostitutes’, Christiansen compared the professor with those who claim that COVID-19 is a hoax.