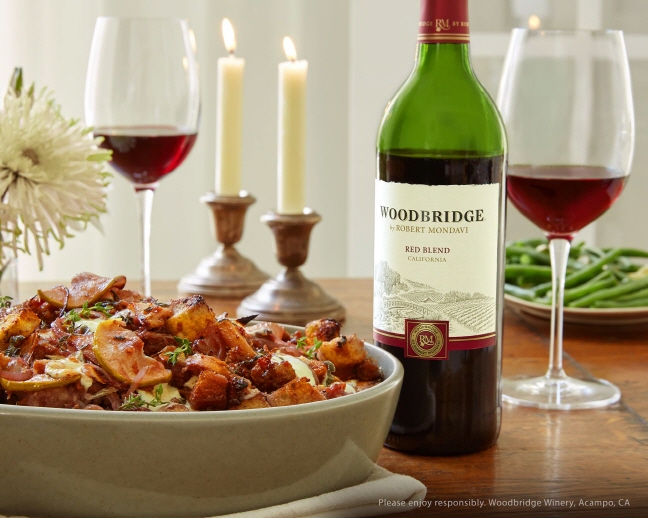 LODI, Calif., Aug. 28 (Korea Bizwire) — Woodbridge by Robert Mondavi, the number-three glass wine brand in the United States* with a forty-year history of making quality California wine accessible to all, announces today a new partnership with three major teams in professional football: the Los Angeles Rams, Chicago Bears, and New York Giants. The new agreement commences with the 2019 football season and is supported by a national and regional 360-marketing plan.

As the Official Wine Partner of three professional football teams, Woodbridge will bring its award-winning wines to one of America’s biggest consumer arenas through a range of on- and off-site marketing activations. On a national scale, Woodbridge will promote its new “From One For All” campaign during live sports games, with TV advertisements running on ESPN and NFL Network for the first time, and host a national consumer sweepstakes at retail for a chance to win an unforgettable football experience for the 2020 NFL season.

Within the home markets of each team partner, Woodbridge Wines will bring the on-site football experience to life at retail with in-store merchandising including a series of dynamic displays and an exciting consumer sweepstakes offering a chance to win two pairs of tickets to a 2019 season home game. Woodbridge will further support the partnerships with awareness generating digital advertising campaigns and out-of-home advertising that includes billboards and double-decker buses in the area surrounding each team’s stadium.

To specially celebrate the partnerships, Woodbridge Wines will debut a new 375ml can format of its beloved Cabernet Sauvignon. The limited-release cans will be available beginning August for a suggested retail price of $5.99 in the home markets of each team partner including Southern California, Illinois, New York and New Jersey. For wine lovers outside of these select markets, Woodbridge will also introduce a new single serve 500ml Grab-and-Go format, providing consumers with a new way to enjoy their favorite Woodbridge wines on-the-go. The Woodbridge Grab-and-Go Packs will be sold nationally starting this September for a suggested retail price of $5.99 and available in Woodbridge Cabernet Sauvignon and Chardonnay, the number-two most popular wines in their category in the United States**, respectively, as well as Pinot Grigio and Red Blend.

“Woodbridge by Robert Mondavi Wines is proud to partner with the Los Angeles Rams, Chicago Bears, and New York Giants – three widely respected and beloved teams in the National Football League,” said Jaymie Schoenberg, Vice President of Marketing for Woodbridge by Robert Mondavi Wines. “Much like Woodbridge Wines, football has a way of bringing people together over a shared passion and through each of these partnerships, we look forward to introducing sports fans to our full range of high-quality wines at an exceptional value.”

Each partnership will officially commence in September with integrated marketing support through the end of the season the following February.

ABOUT WOODBRIDGE BY ROBERT MONDAVI WINES:
Robert Mondavi founded Woodbridge Winery near his childhood home in Lodi, California to make quality wines accessible to wine lovers across the world to enjoy as part of daily life. Mr. Mondavi’s pioneering vision for Woodbridge by Robert Mondavi has raised the standard for everyday wines in America, and has made Woodbridge one of the most beloved wines in the U.S. The trusted heritage and quality of Woodbridge by Robert Mondavi ensures you don’t need to spend more for great wine and the diverse portfolio of classic wines marked by bright fruit flavors made to complement food means there is something for everyone. For more about Woodbridge by Robert Mondavi, including food and wine pairings and recipes ideas, please visit www.WoodbridgeWines.com. Please enjoy responsibly. © 2019 Woodbridge, Acampo, CA

ABOUT THE LOS ANGELES RAMS:
The Los Angeles Rams – Los Angeles’ original professional sports team – stand as one of the oldest franchises in the National Football League and since its founding in 1937, have garnered three World Championships and sent 30 of its members to the Pro Football Hall of Fame. In 2018, the Los Angeles Rams won the NFC Championship and appeared in their fourth Super Bowl. As a professional sports team, the organization is committed to be a valuable civic partner and serving the greater Los Angeles area 365 days a year. The team currently hosts games at the Los Angeles Memorial Coliseum, with plans to move to a new world-class stadium at the LA Stadium and Entertainment District Hollywood Park, currently under construction in Inglewood, California, for the 2020 NFL season. For more information visit www.therams.com and follow the Rams’ social media channels.

ABOUT CHICAGO BEARS:
One of the founding franchises of the National Football League, the Chicago Bears were established in 1920 as the Decatur Staleys by legendary player, coach and owner, George S. Halas; the Bears are the only team celebrating their 100th season in conjunction with the NFL this year. The team moved to Chicago in 1921 and has gone on to win the most games in league history along with nine championships. The Bears 28 Hall of Famers is the most of any team in the NFL. In the community, the Bears strive to be leaders throughout Chicago and its suburbs by supporting initiatives focused on youth football, health and fitness, volunteerism and civic involvement, and education.

ABOUT THE NEW YORK FOOTBALL GIANTS:
A cornerstone franchise of the National Football League, the New York Football Giants began play in 1925. With eight championships, including a victory over the New England Patriots in Super Bowl XLVI, their second in five seasons, the Giants are the only franchise in the NFL with a Super Bowl victory in each of the last four decades. Headquartered at the Quest Diagnostics Training Center in East Rutherford, N.J., the Giants enter their 95th season of play this fall.  For more information, visit www.giants.com.