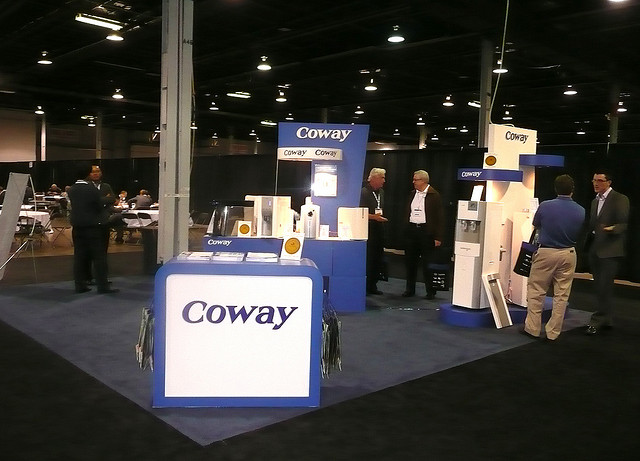 Woongjin Coway is currently the No. 1 player in the water purifier and air purifier rental market. (image: FoodBev Photos/flickr)

Netmarble and the U.S. private equity firm Bain Capital were the two final bidders for a some 25 percent stake in Woongjin Coway, according to industry sources. The bidding closed Thursday.

Woongjin Group, which put its water purification making unit up for sale to improve its financial status, is expected to select the preferred bidder next week.

The sale of Woongjin Coway was about to end in disappointment after major players that joined the preliminary bidding, including SK Networks Co., announced they’re pulling out of the auction.

But Netmarble’s joining is now reigniting interest in the sale of Woongjin Coway.

Market watchers said Netmarble’s decision to buy Woongjin Coway is in line with the company’s recent moves to secure its new growth engine.

The company was also linked with the acquisition of online game giant Nexon.

Netmarble said it was attracted by Woongjin Coway’s rental platform.

Woongjin Coway is currently the No. 1 player in the water purifier and air purifier rental market, and is estimated to have more than 7 million customers, with 6 million in South Korea.

Woongjin Coway has been one of the cash cows for Woongjin Group. Woongjin Coway posted sales of 1.4 trillion won and an operating profit of 273.4 billion won in the first half of the year, all record highs for the company.

Industry observers expect that the price of the Woongjin Coway deal to be around 1.9 trillion won, which is not a big burden for Netmarble. As of the first half of 2019, Netmarble had cashable assets of 1.7 trillion won.

“Netmarble is believed to have amassed more than 2 trillion won when it tried to acquire Nexon in the past,” a source close to the matter said.

“Although there could be some changes, I’ve heard that the two sides do not have big differences in price regarding the deal.”