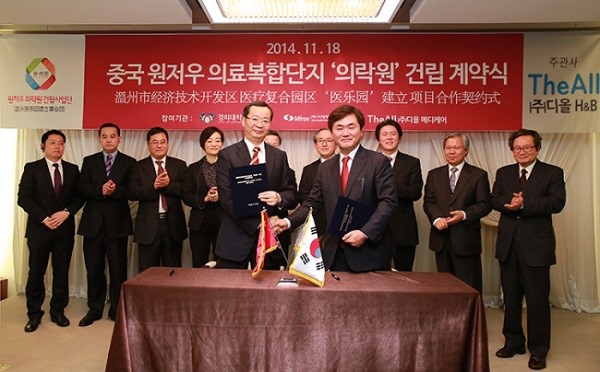 The All H&B signed an agreement with the Wenzhou local government in Zhejiang Province to establish a 200,000-square-meter medical complex dubbed “Yileyuan.” (image: The All H&B)

The All H&B, the Korean organizer of a medical complex to be built in China, announced on November 18 that it signed an agreement with the Wenzhou local government in Zhejiang Province to establish a 200,000-square-meter medical complex dubbed “Yileyuan.”

The medical complex will include various healthcare facilities such as medical checkup centers, plastic surgery hospitals, cosmetic centers, postnatal care centers, nursing homes and other clinics. The complex, located in a green area and adjacent to a lake, is envisioned as a one stop healthcare solution for all stages of life. The construction is expected to begin in March 2015 and finish in February 2018.

To date, Kyunghee University Healthcare Center and The All Medical Center have committed to joining the Chinese medical complex.

The project is part of the Chinese government’s 12th five-year plan to set up a new healthcare system, in order to boost medical industries and increase the level of Chinese people’s health. The local government plans to pay more than 30 percent of the total cost of 1.2 trillion won.

The organizer expects to create more than 8,000 jobs, as well as earn more than 12 billion yuan, or about 2 trillion won, a year. Approximately 100,000 people are expected to use the medical services annually.

“The project doesn’t refer to the export of Korean hospitals to China. It actually means that we will establish an advanced medical complex for China,” said Mun Jung-il, CEO of The All H&B. “This agreement will become a stepping stone for both of us to boost our economies, as well as create quality jobs in the medical sector,” he added.

The agreement is not the only one between South Korea and China in the medical industry. Last August, Jeju Free International City Development Center and Greenland Holding Group, a China-based business group, signed a 600-billion-won agreement for the development of additional sites in the healthcare town on Jeju Island.