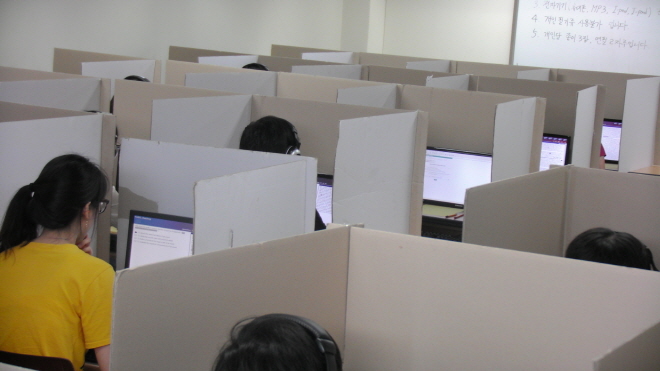 The ETS will recommend rather than mandate the presence of parents or guardians of test takers aged 15 or under when they are being tested beginning this month. (image: Seogang College)

The Educational Testing Service, a U.S. nonprofit organization that administers and scores the Test of English as a Foreign Language (TOEFL), had demanded parents or guardians be present at testing sites when their children aged 15 years or younger took a TOEFL test.

The ETS had nullified the TOEFL scores of children aged 15 years or younger and refused to return test fees unless their parents or guardians stayed on-site during their test, according to the Fair Trade Commission (FTC).

The ETS has claimed it had demanded the presence of parents or guardians for the safety of test takers aged 15 years or younger, but the FTC said the responsibility to manage those taking tests falls on the administrator.

After a three-month probe into the ETS, the commission said the practice of nullifying TOEFL scores without a test-fee refund is not fair and is null and void.

The ETS voluntarily changed its policy during the probe, which ended in February.

The ETS will recommend rather than mandate the presence of parents or guardians of test takers aged 15 or under when they are being tested beginning this month. The ETS also deleted clauses on nullifying TOEFL scores and not refunding fees, according to the commission.

No statistics were immediately available on how many children under the age of 16 take TOEFL tests each year in South Korea.