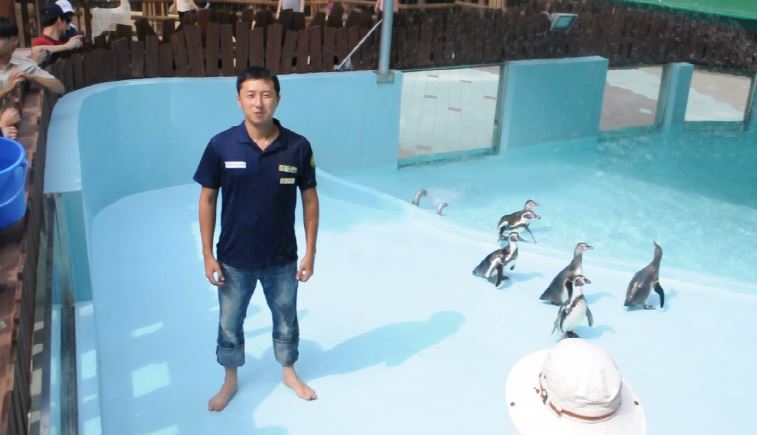 A staff of marketing team at Samjung The Park Zoo in Busan has taken on an Ice Bucket Challenge in their penguin cage on August 23. (image: Samjung the Park Zoo)

A staff of marketing team at Samjung The Park Zoo in Busan has taken on an Ice Bucket Challenge in their penguin cage on August 23. The park has nominated Seoul Zoo, Daejeon OWorld and Geoje SeaWorld for the next round of the challenge. The challenge is expected to continue among other zoos and aquariums in Korea.

The Ice Bucket Challenge, sometimes called the ALS Ice Bucket Challenge, is an activity involving dumping a bucket of ice water on someone’s head to promote awareness of the disease amyotrophic lateral sclerosis (ALS) and encourage donations to research. It went viral throughout social media during mid 2014. In the UK, people participate in the challenge for the Motor Neurone Disease Association.

The challenge dares nominated participants to be filmed having a bucket of ice water poured on their heads and challenging others to do the same. A common stipulation is that nominated people have 24 hours to comply or forfeit by way of a charitable financial donation.

The Origins of the Ice Bucket Challenge

The origins of the idea of dumping cold water on one’s head to raise money for charity are unclear and have been attributed to multiple sources. From mid-2013 to early 2014, a challenge of unknown origin often called the “Cold Water Challenge” became popular on social media in areas of the northern United States. The task usually involved the option of either donating money to cancer research or having to jump into cold water. One version of the challenge, which took place in Salem, Indiana as early as May 15, 2014, involved dousing participants with cold water and then donating to a charity; for example, the Auckland Division of the Cancer Society of New Zealand. As with similar challenges, it was usually filmed so footage can be shared online. The National Fallen Firefighters Foundation popularized the “Cold Water Challenge” in early 2014 to raise funds as an unsanctioned spin-off of the polar plunge most widely used by Special Olympics as a fundraiser. In May 20, 2014, the Washington Township, New Jersey fire department posted a video on YouTube participating in the “Cold Water Challenge” with fire hoses. Participating members of the department were subsequently punished for using fire department equipment without permission. (Wikipedia)