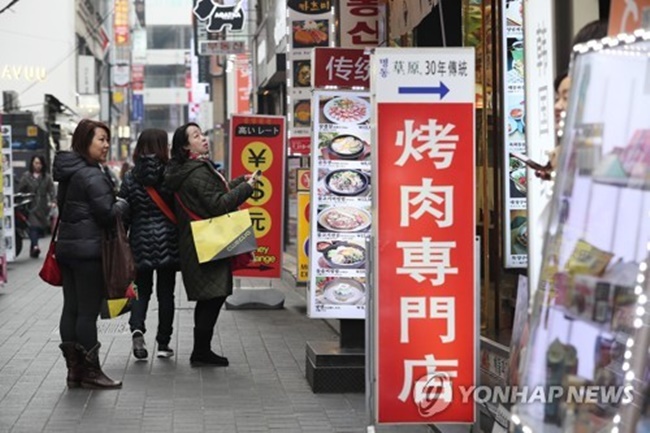 The tally of Chinese visitors came to 299,247 last month, according to the data by the Korea Tourism Organization. (Image: Yonhap)

The tally of Chinese visitors came to 299,247 last month, according to the data by the Korea Tourism Organization.

The overall number of visitors from the neighboring country in the January-November period stood at 3.83 million, down 49.1 percent from 7.53 million a year earlier, it showed.

Yet, the drop rate slightly decreased from the previous months, where the tally soared to as high as 69.3 percent in July.

Dragged down by the weak inbound traffic from China, the total number of foreigners who visited South Korea last month fell 16.5 percent on-year to 1 million from 1.3 million, according to the data.

Chinese visitors accounted for nearly half of the 17 million foreigners, who visited South Korea last year.

After months of disputes over Seoul’s deployment of a U.S. Terminal High Altitude Area Defense (THAAD) system, the two countries recently agreed to put their bilateral relationship back on the “normal track.”

The number of outbound South Korean nationals, meanwhile, came to 2.23 million in November, up 22 percent from 1.83 million a year earlier, the latest findings showed.