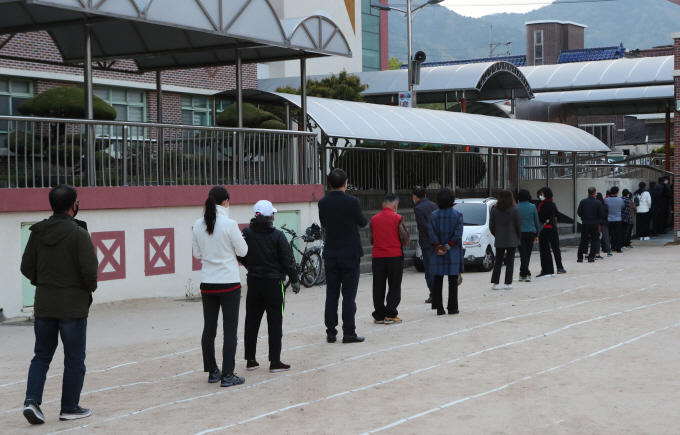 Voters form a long line to cast their ballots at a polling station in the southeastern city of Changwon on April 15, 2020, as South Koreans began voting the same day to elect a new parliament amid the outbreak of the new coronavirus. (Yonhap)

SEOUL, April 15 (Korea Bizwire) — New 18-year-old voters cast their ballots in a general election for the first time on Wednesday amid concerns that the coronavirus may affect the turnout of the new voters.

In late 2019, the National Assembly passed an electoral reform bill lowering the voting age from 19 to 18 and allowing eligible high school students to vote.

Until last year, South Korea was the only country among Organization for Economic Cooperation and Development (OECD) member countries that did not grant voting rights to 18-year-olds.

Although the spread of the coronavirus emerged as a key element of setback that could lower voter turnout, many young voters headed to polling stations with hopes their votes could change Korean society for the better.

“It feels good to become a proud voter of South Korea … I came to the polls excited to cast my first vote and to exercise my voting rights to voice an opinion, however small, in youth policies,” said Lee Min-seo, a senior high school student who came to vote with her parents in Chuncheon, 85 kilometers east of Seoul.

First-time voters also said they carefully studied the political campaign promises of candidates to come up with their decisions.

“I decided to vote because I wanted to experience the implications and the pros and cons of the elections that I had learned in school, and to exercise my valuable rights that are guaranteed by law,” said Park Chae-won, a senior high school student in Sejong city, 130 kilometers south of Seoul.

Park said she voted for the candidate that came up with feasible promises after looking closely at the candidates’ criminal records, whether or not they served in the military and the list of properties they owned.

“I cast my ballot hoping for a better South Korea,” said a college freshman from Gyeongbuk Province who asked to be identified only by his surname Kim.