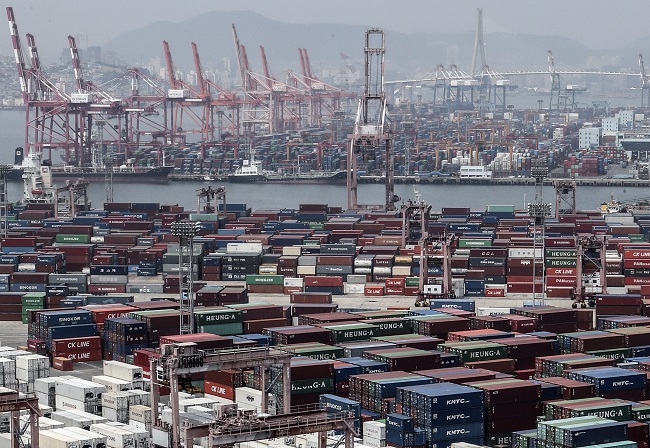 SEOUL, Jan. 18 (Korea Bizwire) — South Korea’s antitrust regulator said Tuesday it has decided to impose a combined fine of 96.2 billion won (US$80.7 million) on 23 Korean and foreign shippers for their 15-year-long collusion to fix freight rates.

Since 2018, the Fair Trade Commission (FTC) has been looking into allegations that the country’s top shipper, HMM Co., and 22 local and foreign shipping lines colluded to fix higher freight rates for Southeast Asian sea routes.

The shippers — 12 South Korean and 11 foreign — colluded to set the shipping costs of container cargo services 120 times between December 2003 and December 2018 in a bid to hike the minimum level of freight rates and other costs, according to the regulator.

The South Korean shippers claimed they are allowed to take collective actions on freight rates and other contract conditions for transportation under the country’s maritime shipping act.

But the regulator said their acts were “illegal” as they failed to meet certain criteria that are permissible under the law.

For legitimate collective actions to be recognized under the shipping act, shipping lines must report to the maritime minister within 30 days after collective behavior. They should also adequately discuss the move with a group of freight owners prior to making a report.

Korean shipper Korea Marine Transport Co. will be tentatively slapped with the largest fine of 29.6 billion won and HMM will face a fine of 3.6 billion won.

The 11 foreign shippers — four companies from Taiwan, three from Singapore and four from Hong Kong — will be imposed with fines. Singapore-based Sealand Maersk Asia Pte Ltd. is expected to face a 2.37 billion-won fine.

But the total amount of the fine was far smaller than earlier expected as the regulator has decided not to impose a fine for their collusion on import routes, citing its limited impact.

In May, the FTC informed the shippers in a review report that it may impose up to 800 billion won in fines for the violation of the fair trade act.

“In deciding the level of fines, the regulator fully took account the nature of the shipping industry,” FTC chief Joh Sung-wook told a press briefing.

The FTC expected its latest decision to help prompt shippers to take collective actions on freight rates under due process and prevent trading companies from sustaining financial damage.

“The commission will continue to sternly implement law against suspected illegal collusion on freight rates in the shipping sector,” Joh said.

The regulator is currently looking into allegations that shipping lines colluded to fix shipping costs for the South Korea-China routes and Korea-Japan ones. 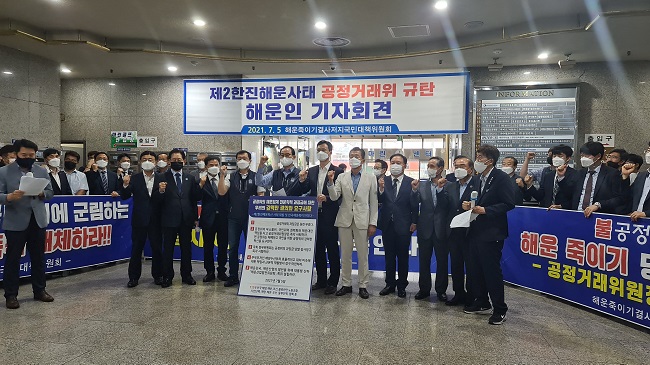 Shipping companies, scholars and activists hold a press conference in the southeastern port city of Busan, in this file photo from July 5, 2021, to call on the Fair Trade Commission to drop its move to impose a fine for alleged collusion on freight rates by 23 local and foreign shippers. (Yonhap)

The Korea Shipowners’ Association, a group of shippers, expressed regret over the FTC’s decision and said it plans to file an administrative suit against it.

“Shippers have taken collective actions based on the maritime ministry’s supervision and the shipping act for the past 40 years. But the FTC has stigmatized shipping lines as operators of illegal acts,” it said.

The latest collusion case sparked fierce protest from an association of shippers and led to tensions at the parliamentary level over a push to revise the maritime shipping act.

Local shippers said if the regulator imposes what they see as an excessive fine, it could deal a blow to the country’s shipping industry.

A ruling party lawmaker proposed a revised bill last year that says collective actions by shippers will not be subject to the antitrust act, in a move to put pressure on the FTC.

The maritime ministry and a related parliamentary committee sided with the shipping sector, saying the shippers’ actions were justifiable collective ones under the shipping law.

The FTC said it is in talks with the maritime ministry to revise the shipping act in a way that specifies the nature of shippers’ collective behavior that will be governed by the fair trade act.