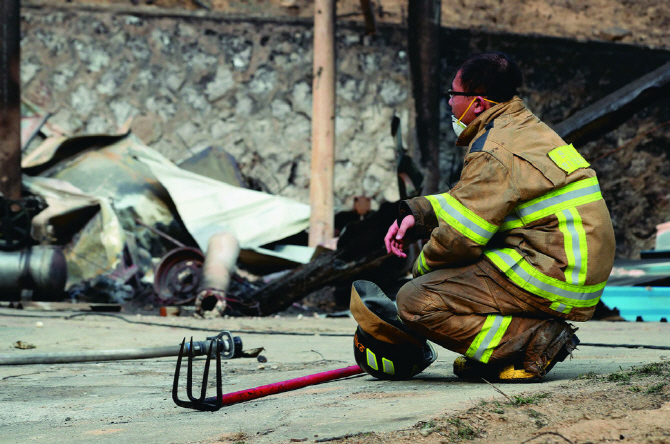 According to a report released Wednesday by the National Fire Agency, 2,453 people, or 4.9 percent of all firefighters in South Korea, were classified as “suicide-risk.” (Yonhap)

SEOUL, Aug. 29 (Korea Bizwire) — More than 2,400 of the nation’s firefighters find themselves in a worrisome situation, as they have been classified as being at risk of taking the extreme measure of ending their own life.

According to a report released Wednesday by the National Fire Agency (NFA), 2,453 people, or 4.9 percent of all firefighters in South Korea, were classified as “suicide-risk.”

Some 4,436 firefighters, or 8.9 percent of the respondents, said they had thought about committing suicide at least once in the past year.

However, many firefighters were still under such significant stress that they considered extreme options.

Regarding self-injurious behavior, 3.1 percent, or 1,566 people, said they had suffered from self-inflicted injuries over the past year.

Asked whether they acted in self-injurious behavior with the intention of killing themselves, 53 people, or 0.1 percent, said yes.

According to the four major stress situations of these 53 people, 54.7 percent of them were in the “danger” group that needed to be managed and treated due to Post-Traumatic Stress Disorder (PTSD).

The figure is far higher than the overall status.

The survey was jointly conducted by the NFA and Seoul National University Bundang Hospital with 208 questions in 15 categories, including PTSD and depression.