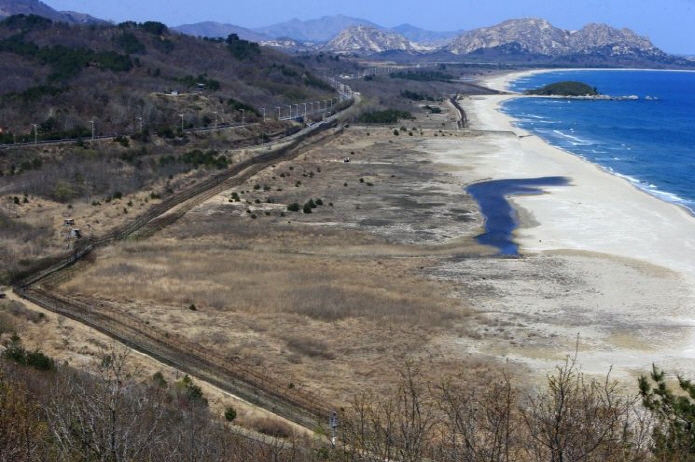 The Goseong DMZ Peace Trail, about 470 km east of Seoul, will have two courses. (Yonhap)

SEOUL, Apr. 26 (Korea Bizwire) — The eastern coastal section of the Demilitarized Zone (DMZ) will be open to civilian hikers this weekend for the first time since the end of the Korean War, government officials said Friday.

One of three DMZ Peace Trails planned by the South Korean government and recently approved by the United Nations Command, it will be opened in Goseong, a Gangwon Province border town on the east coast, on Saturday, according to the officials.

The two other border hiking trails will be opened in Paju in the western section of the DMZ and Cheorwon in the central part at later dates, they said.

The Goseong trail will be run twice a day for six days, except Mondays, every week. Up to 20 people can participate in course A at one time and up to 80 people in course B. Guides will accompany hikers to give explanations of security facilities and the ecological environment.

People wanting to walk along the Goseong trail can apply through the DMZ’s integrated information system website (www.dmz.go.kr/english), run by the Ministry of the Interior and Safety, or Durunubi (www.durunubi.kr), an online guide to hiking in Korea produced by the Korea Tourism Organization.

From the Mount Kumgang Observatory, in particular, hikers will be able to have a closer look at North Korea’s scenic coasts, lakes and mountains, officials said.

“Goseong aims to become a symbol of world ecological peace through the peaceful use of the DMZ, a symbol of the division of South and North Korea,” a government official in Goseong said.