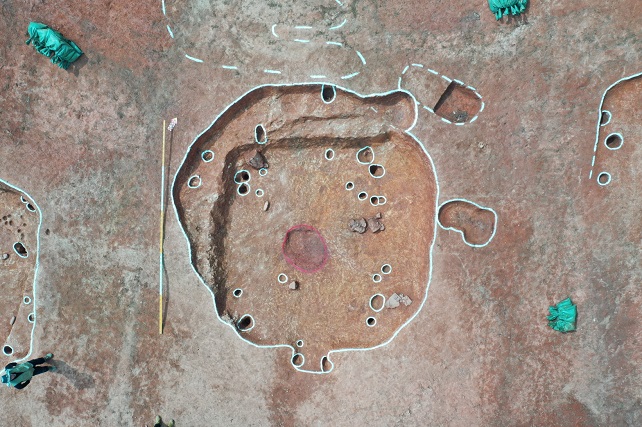 This photo provided by the Gimpo city government shows the foundations of Neolithic dwellings in Gimpo, west of Seoul.

SEOUL, May 17 (Korea Bizwire) — South Korean archaeologists have discovered the foundations of 25 Neolithic dwellings in a coastal area in Gimpo, just west of Seoul, the Gimpo city government said Monday.

The scale of the New Stone Age houses in Gimpo’s Daegot district, about 30 kilometers northwest of the capital, varies from 3.5 to 6.4 meters in width and 3.8 to 5.4 meters in length, and some dwelling structures, such as entrances and exits, remained relatively intact, the city government said.

Several relics, such as comb-pattern pottery, were excavated at those house sites believed to be used in the early and middle Neolithic period, it said.

The discovery came while the municipality of Gimpo and the Gyeonggang Research Institute of Cultural Heritage were carrying out archaeological excavations in the Daegot district, home to a Joseon Dynasty (1392-1910) military base called “Deokpojin.”

Earlier, a small amount of Joseon Dynasty relics were found near Deokpojin.

It is the first time Neolithic dwelling sites have been discovered in Gimpo.

The city government plans to conduct additional excavation work and research as the Neolithic dwelling sites appear to have academic value for research on the life of the Neolithic period.