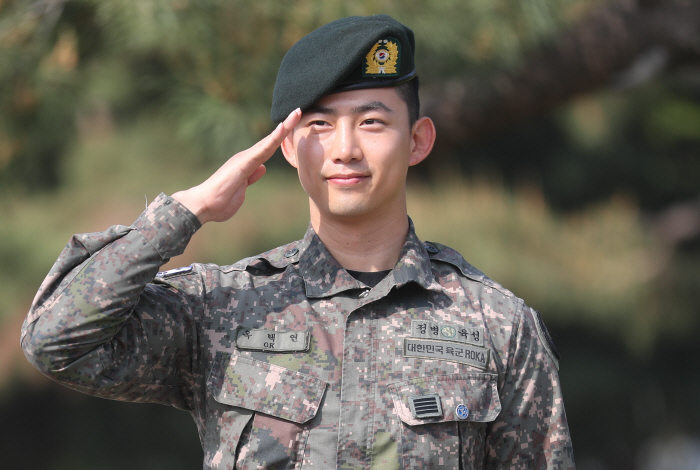 Ok Taecyeon greets fans and journalists on Goyang, Gyeonggi Province, just north of Seoul, after he was discharged from the military on May 16, 2019. (Yonhap)

SEOUL, May 16 (Korea Bizwire) — Ok Taecyeon, a member of K-pop boy band 2PM, completed his 20 months of military service Thursday, setting himself up for a return to show business.

“I still can’t believe (I was discharged) after waking up to a morning bugle today. Maybe I could if I wake up to an alarm instead of a morning bugle tomorrow morning,” the 31-year-old told reporters and fans at the 9th Infantry Division in Goyang, Gyeonggi Province, just north of Seoul.

He served the division as a training coach, earning the nickname “Captain Korea” among his fans for the high performances and exemplary character he showed during the service.

“I have heard many times that I have a knack for military service, but I want to grow out of it now,” he noted.

Hwang Chan-sung, another 2PM member, came out to the scene to welcome him back while some 500 fans gathered together to celebrate Ok’s return.

“Thank you so much for waiting for me,” Ok said to cheering fans. “I will work hard to come back with good (shows) as soon as possible.”

Ok gave up his permanent resident status in the United States to fulfill the national defense service young Korean men are required to complete.

In April, he won official commendation as an exemplary soldier.

Ok will start to consider scenarios for TV drama series to return his entertainment career. His new management agency, 51k, said, “(We will) do our best to help Ok Taecyeon continue his active career as a member of 2PM and an actor in Korea and Asia as well as across the world.”