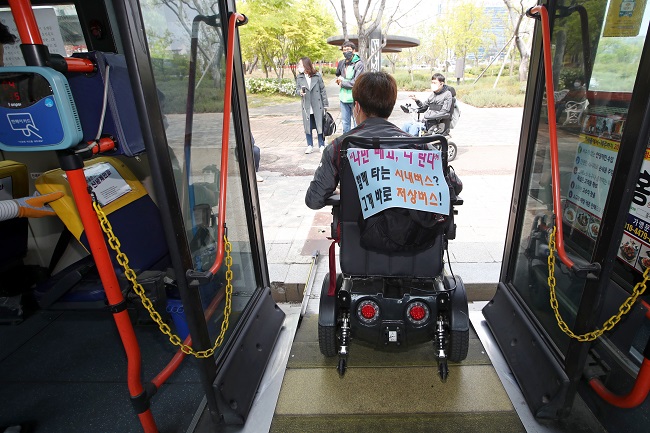 In this file photo, a handicapped activist gets off a bus in Gwangju, 330 kilometers south of Seoul, on April 20, 2020, while heading to a rally for rights improvement for disabled people. (Yonhap)

The Ministry of Land, Infrastructure and Transport reported that there were 15.1 million South Koreans struggling with access to transportation as of late 2021, which is nearly 30 percent of the entire South Korean population.

Of them, seniors over 65 years of age accounted for 57.1 percent of the total (8.85 million people), reflecting the country’s aging population.

The availability of restrooms for the disabled and elevators for wheelchairs stood at 77.3 percent, up by 4.8 percentage points from 2016.

These facilities were most available on railways (98.9 percent), followed by city railways (96 percent), aircraft (73.7 percent) and passenger liners (37.8 percent).

Most of the people struggling with access to transportation traveled by bus (51.6 percent) or subway (14.2 percent).

A survey of 3,000 people including those struggling with access to transportation as well as ordinary people showed that they were most satisfied with railways (80.2 points), city railways (79 points) and aircraft (76.7 points).

Unlike the 2016 survey in which the respondents were most satisfied with aircraft, the pandemic has pulled down the preference for airplanes in the most recent survey.