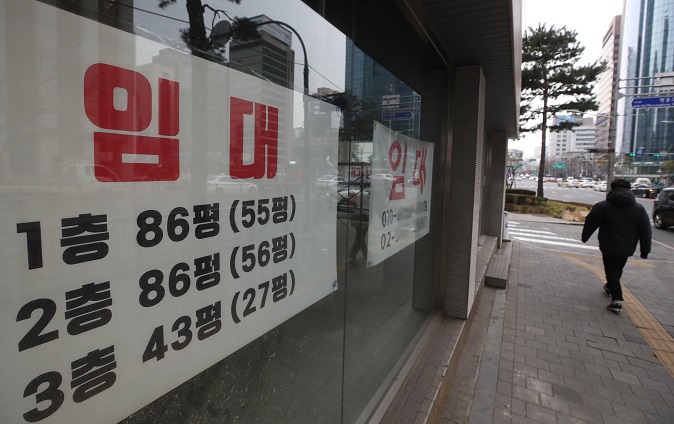 This photo, taken Jan. 5, 2022, shows a for lease sign put up at a store in the shopping district of Myeongdong. (Yonhap)

SEOUL, July 24 (Korea Bizwire) — More than 1 out of 10 workers have experienced layoffs since the onset of the COVID-19 pandemic, with the rate of those who lost jobs reaching nearly 30 percent among non-regular workers, a poll showed Sunday.

The survey of 1,000 employees — 600 regular workers and 400 temporary workers — conducted online by polling agency Embrain Public from June 10-16 at the request of pro-labor groups, showed 15.4 percent of respondents saying they have experienced layoffs since the outbreak of COVID-19 in January 2020.

Of the temporary workers polled, 29.5 percent said they have experienced layoffs during the pandemic, nearly five times the corresponding rate of 6 percent tallied among regular employees, the poll showed.

Of the total respondents, 28.4 percent said their incomes have shrunk since the onset of the pandemic in January 2020, with the corresponding rates among non-regular and regular workers standing at 50.5 percent and 13.7 percent, respectively.

Among the 353 workers who responded they have tested positive for the virus, the rates of those who were given paid sick leave reached 45 percent for regular workers and 15.3 percent for non-regular workers, the survey showed.