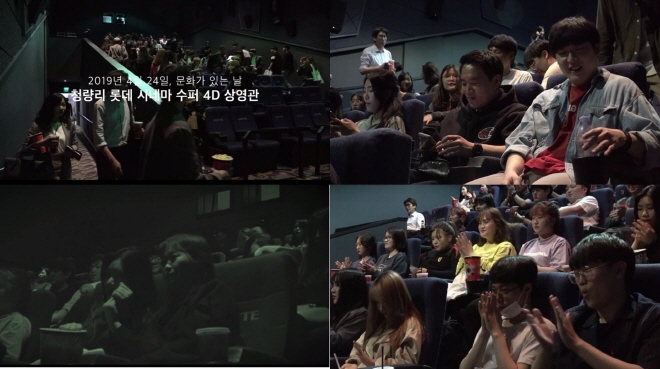 Videos of the campaign with live reactions and experiences of the participants were released on SNS such as Facebook and YouTube. (image: Ministry of Culture, Sports and Tourism)

SEOUL, Jun. 11 (Korea Bizwire) — The “Campaign to Increase the Awareness of the Disabled through Culture” that the Ministry of Culture, Sports and Tourism (MCST) jointly conducted with Lotte Cultureworks Co., the retail giant Lotte Group’s cinema affiliate, is drawing attention.

Some 70 ordinary citizens who visited Lotte Cinema Cheongnyangni Branch in Seoul participated in the campaign, which was held in April to commemorate the day of culture on May 24 and the week of the disabled from May 20 to 26.

The audience, which had been waiting for the movie to be shown while sitting in their seats at the 4D theater, indirectly experienced various situations affecting the disabled, such as walking down the street as a visually impaired individual, through 4D effects after all the lights in the theater were turned off.

The audience, which was surprised at first, applauded in unison when they heard the message from the campaign, “Korea, where everyone enjoys culture without discrimination.”

Videos of the campaign with live reactions and experiences of the participants were released on SNS such as Facebook and YouTube. Such video is attracting much attention and gaining popularity among SNS users.

A video released by MCST and Lotte Cinema recorded 104,000 views on YouTube and 240,000 views on Facebook as of Monday.