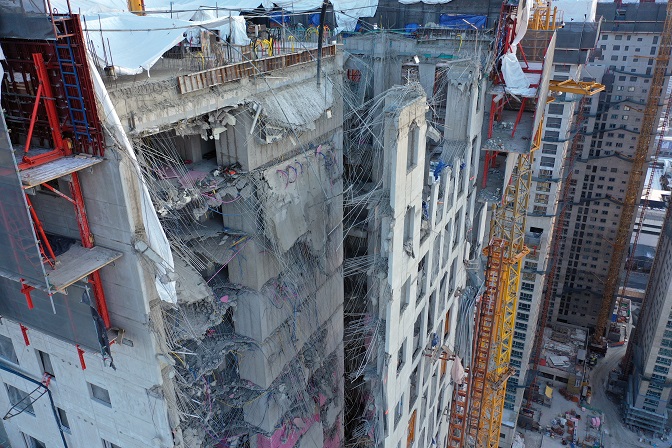 Reinforcing bars are seen sticking out of the facade of a high-rise apartment building under construction in the southwestern city of Gwangju on Jan. 12, 2022, following its collapse the previous day. (Yonhap)

SEOUL, April 27 (Korea Bizwire) — A total of 55 workers were killed at construction sites in the first quarter of this year, the land ministry said Wednesday, as the country began enforcing a new law that calls for the punishment of company chiefs for serious workplace disasters.

Of the 55 victims, 14 were affiliated with seven major construction firms, according to the Ministry of Land, Infrastructure and Transport.

In the previous quarter, 38 construction workers were killed, and 17 of them had worked for the country’s top 100 builders, the data showed.

HDC Hyundai Development Co. reported the largest number of deaths, with six at its construction site in the January-March period, as outer wall structures of its 39-story apartment building under construction in the southwestern city of Gwangju crumbled in January.

“We will launch a special inspection into 15 major construction companies and their related subcontractors by June over their deadly accidents,” the ministry said in a release.

In January, the Serious Accidents Punishment Act went into effect in the country, under which owners and CEOs of companies with five or more employees can face a minimum one-year prison sentence or up to a fine of 1 billion won (US$792,000) in the event of serious workplace disasters.

One thought on “55 Workers Killed at Construction Sites in Q1”