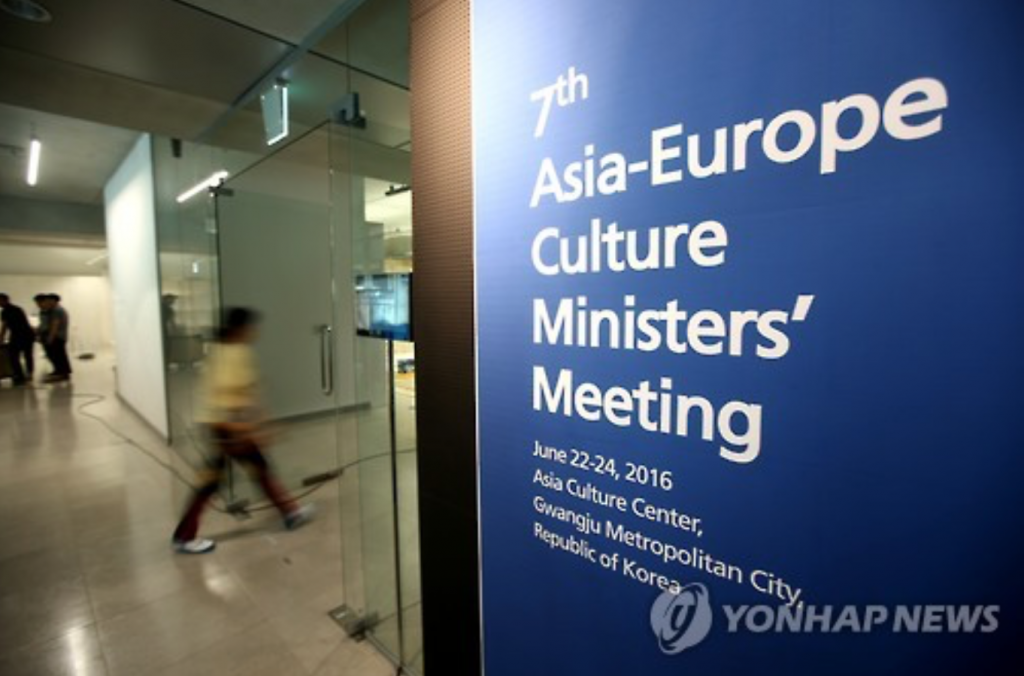 Some 200 delegates from 51 ASEM member countries, including eight culture ministers and 11 deputy ministers, will attend the 7th Asia-Europe Culture Ministers’ Meeting, the Ministry of Culture, Sports and Tourism said.

The event will take place at the Asia Culture Center, a state-run arts and concert venue in Gwangju, located 330 kilometers south of Seoul, till Friday.

South Korea will present its policy of creating the Culture Creation Convergence Belt as a model case of fostering creative industries on Thursday.

The “creative economy” is President Park Geun-hye’s flagship policy of turning new and creative ideas into real business opportunities with the help of cutting-edge science and information technology.

The government began creating the belt, composed of a creative convergence center, a creative venture center, an academy and a cluster of cultural performance facilities, early last year to help tech venture startups work with each other to develop and commercialize creative ideas in the field of culture and the arts. The belt, moreover, aims to foster talent in the culture and content industries.

During the meeting, South Korea plans to propose that ASEM members build a network of young talent interested in turning their creative cultural ideas into businesses so organized support can be provided, according to the ministry.

Ministry officials said the network will begin with four or five countries, including South Korea, but will develop to have more members so they can lead the future of the creative industries in the Asia-Europe region.

On Friday, South Korean Culture Minister Kim Jong-deok will announce a non-binding Chairman’s Statement in his capacity as the meeting’s chair.

The statement will call for ASEM member countries to engage in close cooperation for the future of creative industries, the ministry said.

The host of the next meeting in 2018 will also be announced at the end of this one.

During the meeting period, the delegates will attend a traditional Korean dance performance titled “Mukhyang” by the National Dance Company of Korea and tour cultural facilities in downtown Gwangju.

Launched in Beijing in 2003, the cultural ministers’ meeting of the Asia-Europe Meeting (ASEM) has been held biennially in turns in Asia and Europe with the purpose of facilitating cultural exchanges and cooperation among the member countries. The last meeting was held in the Netherlands in 2014.

ASEM is an exclusively Asian–European forum to enhance relations and promote political, economic and other exchanges. This marks the first time for South Korea to host an ASEM cultural ministers’ meeting.