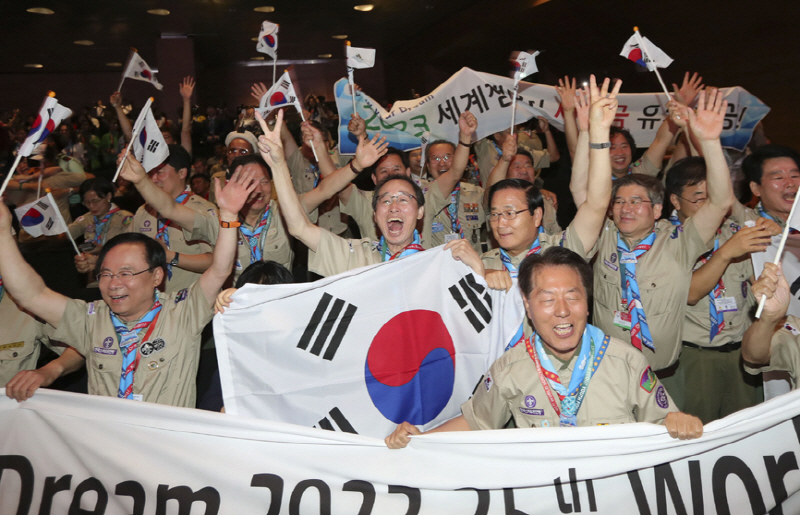 Members of a South Korean hosting committee cheer after their country was named the host nation of the 2023 World Scout Jamboree in the World Scout Conference held in Baku, Azerbaijan, on Aug. 16, 2017. (image: North Jeolla Provincial Office)

SEOUL, Aug. 17 (Korea Bizwire) — South Korea won the bid to host the 25th World Scout Jamboree in 2023 in a vote at the World Scout Conference in Baku, Azerbaijan on Wednesday (local time).

South Korea’s Saemangeum in North Jeolla Province beat Poland’s Gdansk in a ballot held among 168 members of the World Organization of the Scout Movement at the 41st World Scout Conference. South Korea beat Poland 607 to 365 in the ballot that allowed each member country to cast six votes.

Founded in 1920 in London, the event is held every four years to promote international understanding and friendship between scouts from all over the world. About 50,000 scouts from 168 countries are expected participate in the 12-day event to be held at Saemangeum in 2023.

“I’m happy and moved. Words can’t describe it,” Gov. Song Ha-jin of North Jeolla Province said. The governor promised to launch an organizing committee as soon as possible and “prepare for the jamboree along the two pillars of event preparation and infrastructure establishment.”

Completed in 2006, the reclaimed Saemangeum, some 280 kilometers south of Seoul, spans 40,200 hectares and boasts the world’s longest seawall at 33.9 kilometers, certified by the Guinness Book of World Records as the longest man-made sea barrier in the world.

South Korea jumped into the race about a year later than Poland, but apparently managed to pull off a victory thanks to a delegation of North Jeolla province officials traveling to major continents to meet with local scout associations and asking for their votes.

The systemic support from the central government and also the backing from former U.N. Secretary General Ban Ki-moon at the conference, who met with key personnel from other member states, also seems to have worked out in favor of South Korea.

The province predicts that preparations and the hosting of the event would energize the local economy, estimating approximately 1,000 new jobs and production inducements worth 80 billion won.

Last month, South Korean Prime Minister Lee Nak-yon renewed the government’s commitment to the development of Saemangeum, pledging a set of support measures such as an expanded budget for infrastructure construction.