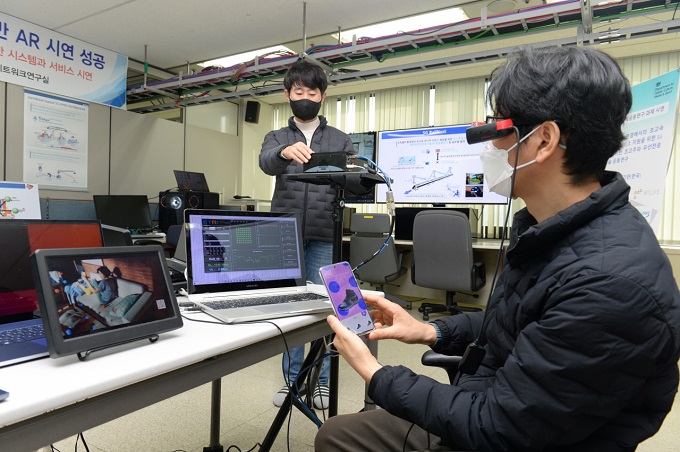 SEOUL, March 11 (Korea Bizwire) — A group of local and foreign researchers have succeeded in demonstrating augmented reality (AR) service at a giga-level speed in a running subway.

In a joint study with researchers from Britain, the Electronics and Telecommunications Research Institute (ETRI) said Wednesday the successful demonstration of 5G AR service at a speed of 1.9 gigabytes per second (Gbps) late last month using a wireless backhaul system in a subway section between Jamsil and Songpa stations.

Backhaul refers to a transmission network that connects the mobile network to the core network. The use of wireless backhaul enables the transmission of data at a low cost even without equipment like fiber-optic cables.

Given that the minimum speed needed for transmission of AR service is 10 megabits per second (Mbps), a speed of 1.9 Gbps is good enough for 190 people to enjoy the service at the same time.

The current average speed of LTE wireless LAN services offered by mobile carriers on the subway is 58.5 Mbps, which is not fast enough to ensure the smooth operation of large-capacity multimedia services.

The research team developed a new technology to dramatically improve the data transmission speed beyond the limit of Wibro-based wireless backhaul, by using a superhigh frequency over 30GHz.

An immersive multimedia service was also tested during the demonstration. Users received the latest sneaker advertising content and wore shoes with AR technology.

The new technology is expected to contribute to enabling people to enjoy high definition video streaming services even in fast-moving locations such as cars and subways.