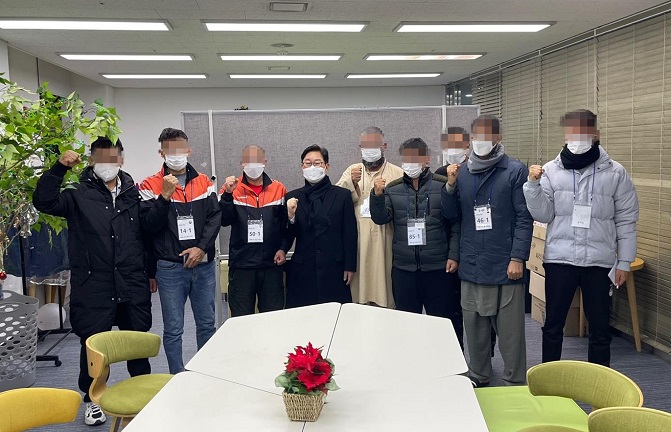 Justice Minister Park Beom-kye (4th from L) and seven Afghan evacuees who recently found jobs in South Korea pose for the camera, in this photo provided by the justice ministry on Jan. 3, 2022.

The six recently got employed at a manufacturer in Incheon, 40 kilometers west of Seoul, and other companies, while another person was admitted to a graduate school in an unidentified regional city.

Accordingly, a total of 20 evacuees from seven households will start leaving their temporary residences in the southwestern city of Yeosu early this month to lead their own lives.

“Your role is important as some of the first (Afghan evacuees) to seek independence in South Korea,” Justice Minister Park Beom-kye told the evacuees set to leave the state-designated facility.

“We hope all of you adapt well to your new lives and give courage to the other people remaining at the Yeosu residence.”

The government plans to keep helping the Afghan evacuees settle down here in cooperation with various civic organizations.

South Korea airlifted 390 Afghan co-workers and their family members under a military mission in August as they faced possible Taliban retaliation for having supported foreign operations.

Except for one household who left for the United States with a special immigration visa, a total of 387 evacuees have been staying at the Yeosu residence and undergoing various assimilation programs, including Korean culture and language lessons.