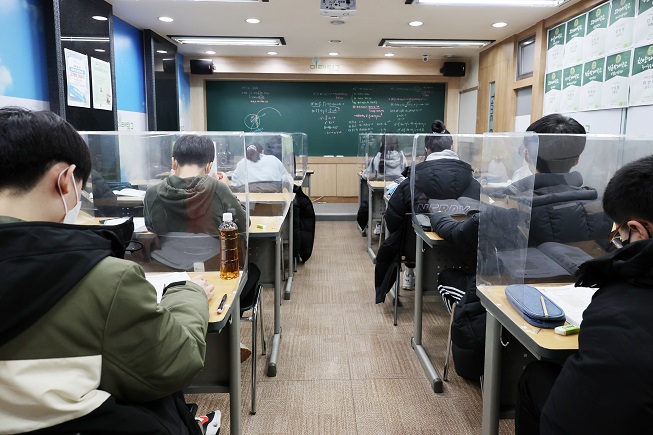 This undated file photo shows students in a classroom at a cram school in Seoul. (Yonhap)

SEOUL, May 6 (Korea Bizwire) — The majority of children come home after 6 p.m. on weekdays, and close to a half of them enjoy less than two hours of free time, a recent survey showed.

The Korean Teachers and Education Workers Union conducted an online survey of 1,841 children in 4th to 6th grades, 88.1 percent of whom said they take cram school classes or have tutoring.

Among the children living in cities, 10.1 percent did not take any private after-school classes, compared to 26.4 percent in rural areas.

As for the reason why they take such classes, 45.6 percent of children said their parents forced them to, while 45.1 percent wanted to learn more.

Among the respondents, 57.3 percent said they come home after 6 p.m., after finishing all schoolwork and private education for the day.

More than half of the children surveyed said they do not attend any after-school programs.

More than 90 percent of children said they spend free time in classrooms.

Asked where they go to play after school, 43.2 percent of children said that they don’t play.