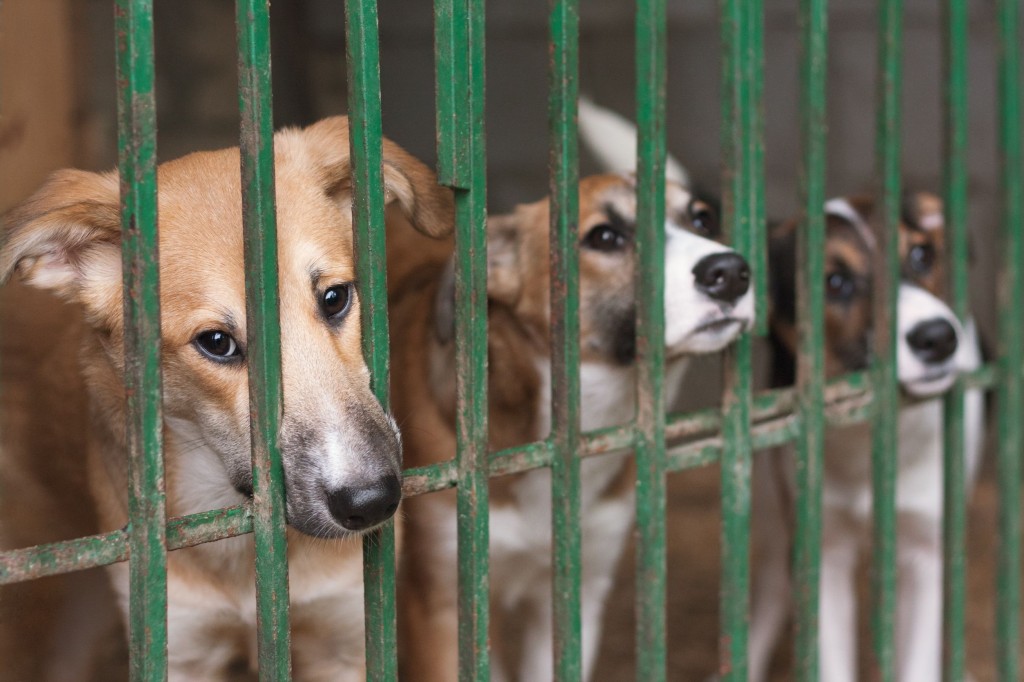 It seems clear that South Korean politicians will continue to bring animal rights and welfare to the debate table, and activists are hoping that animals here will see better days with the country’s new president. (image: KobizMedia/ Korea Bizwire)

SEOUL, March 25 (Korea Bizwire) – Animal welfare has been a centerpiece of debate for South Korean politicians recently with the rising popularity of pets in the country. Data shows 21.8 percent of local households were living with animal companions in 2016 with the pet industry expected to triple by 2020 to a 6-trillion-won ($5.34 billion) market.

The growth, however, has led to a number of unfortunate side effects including animal cruelty, an increasing number of abandoned dogs and cats, and puppy mills that operate under little or no legal guidance.

In line with the new trend, and the changing social awareness towards animals, several potential presidential candidates have included animal rights policies as part of their election platforms as they carve a path to the Blue House. South Koreans will vote for their next commander-in-chief to replace ousted president Park Geun-hye on May 9.

Moon Jae-in, the presidential frontrunner of the Democratic Party of Korea, was one of the first presidential candidates to discuss animal welfare back in 2012 when he ran against President Park.

Moon’s election pledge at the time included stronger animal protection laws, improved animal rights when transporting and butchering animals, a moratorium on burying animals alive (common during culling operations for diseased livestock), and banning animal testing for cosmetics. Although he has not yet announced his policies for this election, it’s unlikely that he will stray from his former pledges.

In 2014, he shared on his Facebook page the story of Jisoon, who had been roaming about his neighborhood, and how he came to take her in. (image: Moon Jae-in Blog)

His commitment to animal rights are not halfhearted. He is a “father” of a dog Jisoon and a cat Jjingjing, both of which he adopted from the streets years ago. In 2014, he shared on his Facebook page the story of Jisoon, who had been roaming about his neighborhood, and how he came to take her in.

With Maru, a male dog Moon had been raising prior to the adoption, Jisoon later gave birth to seven pups which he offered to his supporters across the country.

Moon currently leads all other presidential candidates with an approval rating of 31 percent, according to Gallup Korea’s latest poll, with a wide gap between the runner-up, Ahn Hee-jung, at 17 percent. He hopes to be the first South Korean president to enter the Blue House with a stray dog and a cat.

Interestingly enough, Ahn, who is also competing for the Democratic Party, shares a similar experience. He has two cats, one of which he adopted a couple of years ago. The South Chungcheong governor told the story of the cat, which he named Gureum, on Twitter last December, sparking the interest of local cat enthusiasts.

According to Ahn, Gureum was one of the few stray cats that came and went around his home in Hongseong County. But unlike her other friends in the neighborhood, Gureum seemed more comfortable around his residence than out in the wild, so he decided to build a home and officially take her in.

Sources from Ahn’s campaign said a policy plan for better animal rights will be announced soon, and will mainly focus on introducing stronger regulations for pet suppliers, so that in turn, pets are bred in healthier environments. 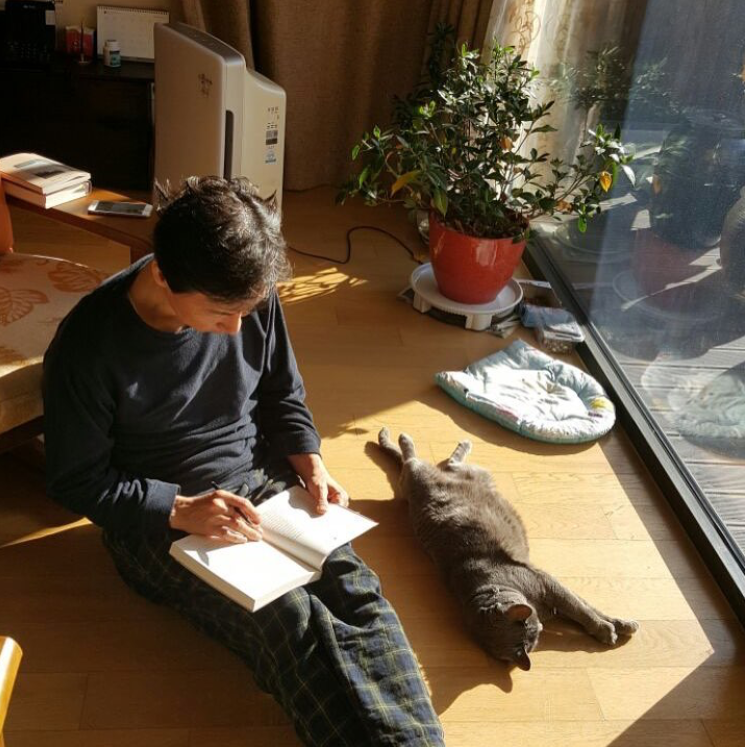 Ahn has two cats, one of which he adopted a couple of years ago. (image: Instagram/ An Hee-jung)

Seongnam Mayor Lee Jae-myeong shares a passion for animal rights as well. Currently fourth and polling at 8 percent, he is also a contender for the Democratic Party.

Mr. Lee recently brought about significant change to Seongnam’s Moran Market, which has long been a major distribution channel in Korea for dog meat, persuading vendors to voluntarily close down their stores and promising to help them develop new businesses.

As part of his election pledges, he introduced eight key plans related to animal welfare, including a more effective animal registration system (i.e. microchip implant), a health insurance policy for pets, promoting the adoption of abandoned animals, and even establishing an animal health department specifically dedicated to monitoring and preventing animal diseases.

Mr. Lee also frequently shares on Facebook and Twitter stories of Haengbok, a Labrador Retriever, which the city rescued from a dog meat farm and adopted in 2015. 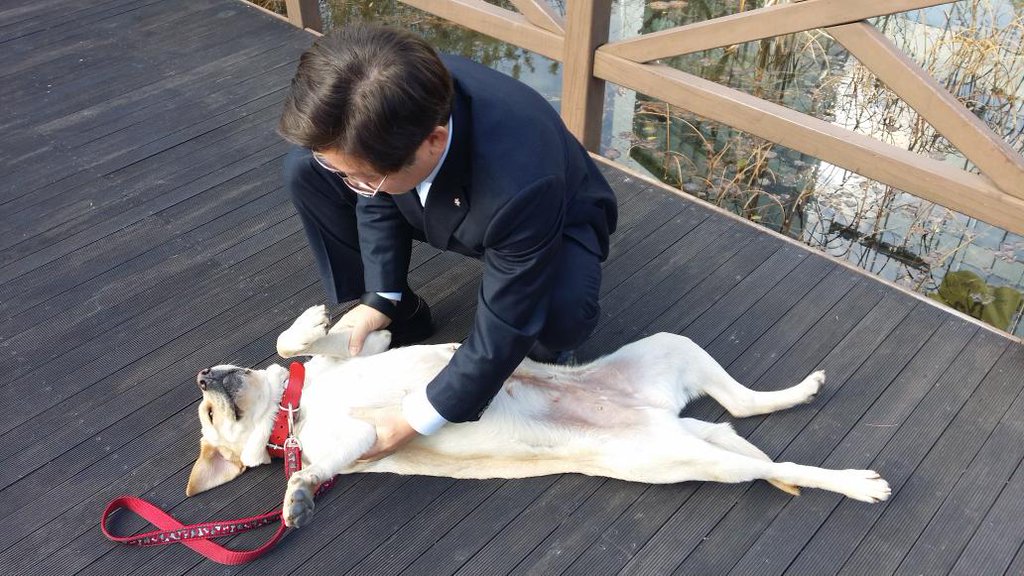 Mr. Lee also frequently shares on Facebook stories of Haengbok, a Labrador Retriever, which the city rescued from a dog meat farm and adopted in 2015. (image: Twitter/ Lee Jae-myeong)

Sim Sang-jung, a progressive candidate from the Justice Party who currently has a 2-percent approval rating, added animal welfare to her list of promises last week, pledging to add animal rights into the constitution. Health insurance policies for animals and limits on animal cruelty products would be introduced under her watch, she said during a press conference last Sunday.

Unlike the more liberal candidates, the conservative candidates have yet to announce any policies on animal welfare or rights, nor do they seem to have stories for local pet owners to relate to.

South Gyeongsang Governor Hong Joon-pyo has the highest approval rating of the right-wing candidates at 8.6 percent, but conservatives in general have been struggling to gather support after the devastating political crisis that ended with President Park’s impeachment.

South Korea’s centrist candidate, Ahn Cheol-soo from the People’s Party, hasn’t introduced any relevant policies either, but a campaign official said that he will soon reveal one that would levy greater responsibilities on pet owners. The founder of the popular AhnLab antivirus software has a 10-percent approval rating, ranking third on Gallup’s poll.

Local experts say animals have become a new medium for politicians to line up support from the public, and are helping the presidential candidates build a friendlier image amongst voters.

“It’s a new way for politicians to attract younger voters,” said Sogang University professor of political science and diplomacy, Ha Shang-eung, in an interview with the Chosun Ilbo. “But it’s mostly still part of their image-making, not necessarily affecting the broader direction of their policies.”

Nonetheless, it seems clear that South Korean politicians will continue to bring animal rights and welfare to the debate table, and activists are hoping that animals here will see better days with the country’s new president. Maybe the next president will even take their pets with them when they leave office.