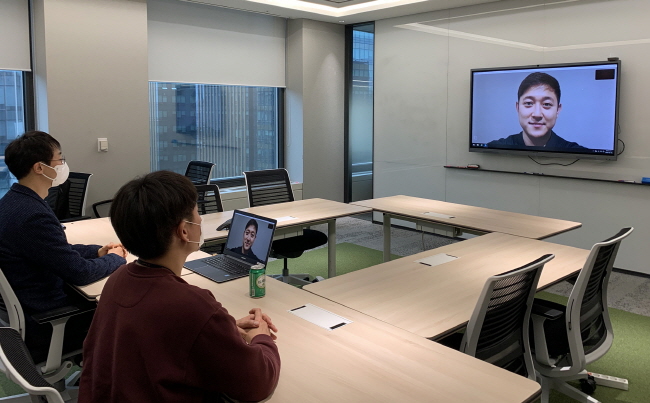 This photo provided by SK Innovation Co. on March 11, 2020, shows company officials testing a video interview system at its office building in Seoul.

SEOUL, Sept. 1 (Korea Bizwire) — A majority of South Korean companies are hiring online as the pandemic drags on.

Online job search portal JobKorea conducted a survey of 365 South Korean businesses, 67.1 percent of whom responded that they are ‘hiring online.’

Among them, 80.4 percent of large businesses have introduced online hiring programs. Online hiring at medium-sized businesses and small businesses accounted for 79.2 percent and 54.9 percent, respectively, of the total.

Among large businesses, more than half of them have introduced online personality and aptitude tests (61 percent) and online interviews (51.2 percent), while 48.8 percent also conducted online written examinations.

A majority of small and medium-sized businesses have been carrying out online interviews.

Among the respondents, 61.6 percent said they had introduced online procedures last year, while 38.4 percent introduced them this year, indicating that the pandemic served as a critical factor for transitioning to online hiring procedures.