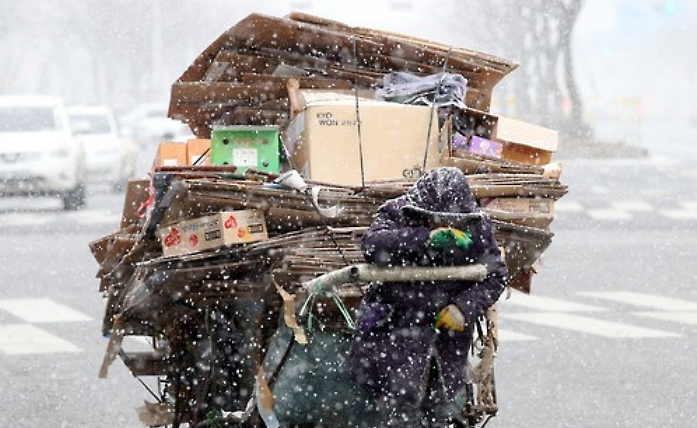 “Struggle to survive”: according to a survey, nearly 60 percent of the respondents said they expect inequality in income and assets to worsen down the road. (image courtesy of Yonhap)

According to the city government’s survey unveiled Monday, 26.5 percent said inequality in the society is “very severe” and 42.3 percent “severe.”

As the areas with the worst inequality, 41.1 percent picked “building assets, such as real estate,” followed by “political and social participation” with 24.1 percent and “job issues, such as employment and promotion,” with 20.8 percent.

The telephone survey was conducted by Hankook Research in mid-January on 1,000 Seoul citizens aged 18 and older.

As the main reasons for the problems, they cited a failure to curb rising property prices (33.9 percent), a lack of restriction on wealth inheritance (22.7%), insufficient taxation of high-income earners (16.5 percent) and low-wage and irregular workers (14.7 percent).

Nearly 60 percent said they expect inequality in income and assets to worsen down the road.

In addition, 64.4 percent said there is a severe inequality among generations.

They believe younger generations are disadvantaged in comparison with older ones in terms of asset building (69.1 percent), social mobility (66.5 percent) and job opportunities (61.5 percent).

Also, 61.1 percent believe institutions of the society work to protect the interests of the upper class, while 17.9 percent think they protect those of the socially vulnerable.

Six out of 10 expect their current class positions to remain unchanged.