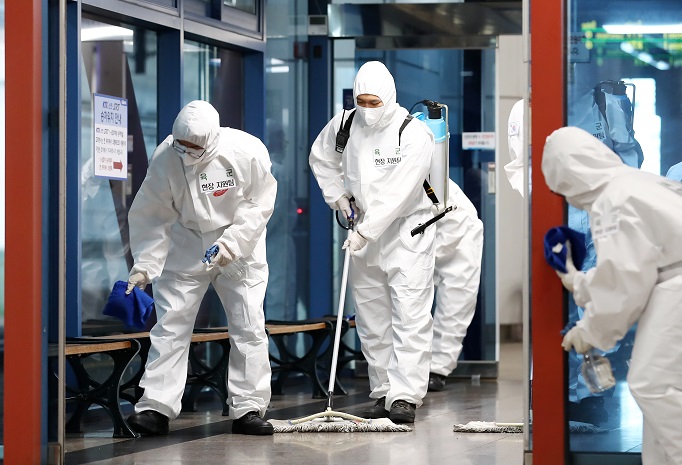 Military servicemen disinfect the platform of Daejeon Station in Daejeon, 164 kilometers south of Seoul, on June 25, 2020, to stem the spread of the new coronavirus. (Yonhap)

SUWON, June 26 (Korea Bizwire) — More than seven out of ten Koreans think the government did well in dealing with the outbreak of the coronavirus, a recent survey showed.

The Gyeonggi Research Institute revealed on Thursday that 76.3 percent of the people who participated in the Social Awareness of COVID-19 survey said the government did a good job in response to the outbreak of the coronavirus.

This figure is 2.6 times higher than the number recorded in a previous survey conducted to determine what people thought about the government’s response to the Middle East Respiratory Syndrome (MERS) crisis.

In the MERS survey, only 29 percent of respondents said the government did a good job.

The COVID-19 survey was conducted via mobile devices on April 30 with the participation of 1,500 residents over 15 years of age in the nation’s 17 major metropolitan areas.

The survey had a 95 percent confidence level with plus or minus 2.53 percent error.

As for the nation’s capability in responding to new epidemics like COVID-19, 90.7 percent of the respondents showed overwhelming support for and trust in medical workers and medical technologies.

Among respondents, 69.3 percent replied in favor of the government’s response capabilities, and 62.1 percent picked mature civic awareness as a key in the response to epidemics.