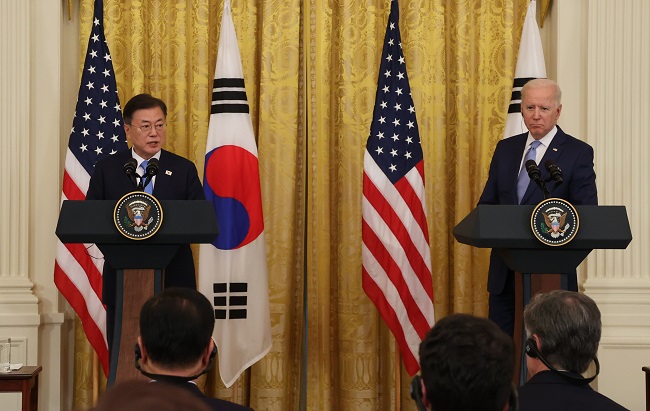 President Moon Jae-in and his U.S. counterpart, Joe Biden, address a press conference at the White House in Washington on May 21, 2021. (Yonhap)

In the Realmeter poll of 2,004 adults conducted nationwide Monday and Tuesday, 56.3 percent said the Moon-Biden summit meetings went “well.” Of the positive reviews, 29.6 percent described them as going “very well,” it said.

On the other hand, 31.5 percent gave negative assessments. It said 13.7 percent of the negative feedback providers said the meetings went “very badly.”

Moon visited the White House in Washington on Friday (local time) for talks with Biden.

The leaders reached summit agreements on the alliance, COVID-19 vaccines and the Korea peace process, as well as partnerships in such industrial sectors as semiconductors and batteries.

In a separate question on Biden’s image, 62.1 percent said the U.S. president has a more favorable one than his predecessor Donald Trump. The poll has a margin of error of plus or minus 2.2 percentage points at a 95 percent level of confidence.