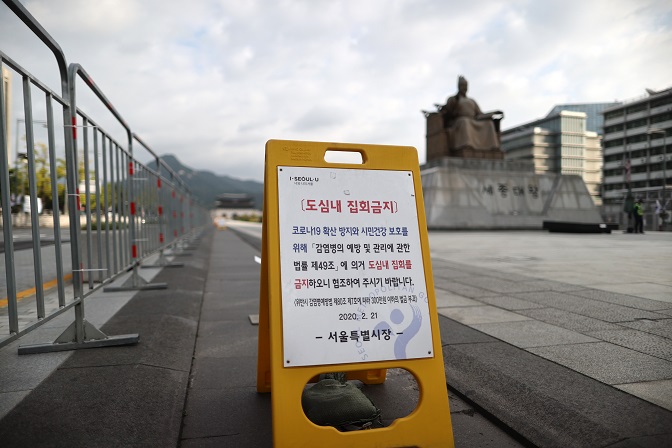 A “no-assembly” sign stands at Gwanghwamun Square in central Seoul on Oct. 2, 2020, a day before National Foundation Day. (Yonhap)

SEOUL, Nov. 4 (Korea Bizwire) — Nearly nine in 10 South Koreans regard authorities’ restrictions on rallies and demonstrations not as a breach of freedom of expression but as an essential measure for the containment of the coronavirus pandemic, a poll showed Wednesday.

According to the poll of 1,000 citizens conducted online by the Korea Press Foundation from Oct. 23-28, 88 percent said authorities’ restraints on mass rallies and demonstrations are inevitable for quarantine purposes.

Only 12 percent of the respondents said such restraints violate people’s rights to freedom of expression.

A conservative civic group critical of the liberal Moon Jae-in government organized a massive anti-government demonstration on and around Gwanghwamun Square in central Seoul on the Aug. 15 Liberation Day.

But its subsequent bids to repeat such downtown rallies on National Foundation Day on Oct. 3 and Hangeul (Korean alphabet) Day on Oct. 9 were thwarted by bans imposed by the police and Seoul city government.

As expected, 34 percent of conservative respondents said rally bans infringe on freedom of expression, while a mere 3 percent of liberals said so.

In a similar outcome, 87 percent said collecting private information through a quick response code-based system and other means from visitors to multiuse facilities, including restaurants, is needed for anti-virus measures, whereas only 13 percent said it is an invasion of privacy.

The invasion of privacy view was supported by 26 percent of conservatives, 11 percent of middle-of-the-roaders and 6 percent of liberals.

Among government efforts to contain the spread of the virus, the “no mask, no public transport” rule gained the highest approval rating of 81 percent, followed by restrictions on indoor religious gatherings with 79 percent and limitations on indoor facilities such as movie theaters and karaoke rooms with 67 percent.

Support for online classes for students and remote working for office workers stood at 54 percent and 49 percent, respectively.