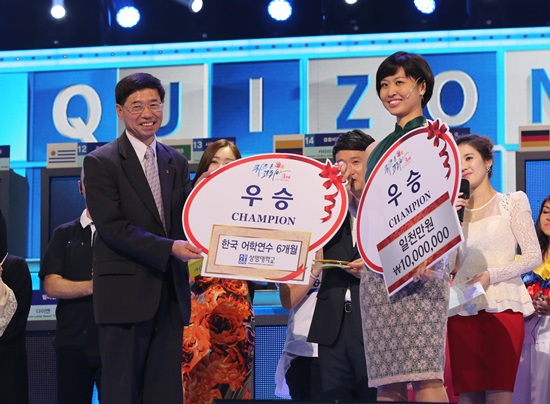 The final winner turned out to be Su-mei Tan, a Singaporean government official. (image: Sangmyung Univ.)

SEOUL, Sep. 10 (Korea Bizwire) – A government official flying over from Singapore won the top prize on ‘Quiz on Korea,’ a quiz show in which foreigners around the world compete against one another about facts or knowledge relating to Korea.

Cohosted by the Ministry of Foreign Affairs (MOFA) and the Korean Broadcasting System (KBS), the final round of the third ‘Quiz on Korea’ was held at the KBS station in Seoul on September 5 with 21 finalists. The 21 finalists went through the local quiz shows where 1,500 contestants took part at the Korean embassies around the world.

Then they competed for the quiz show champion on September 5. Along with the quiz show, during their stay from September 3 through 6, they also tasted a variety of Korean culture by touring around the Korean Folk Village, making kimchi and trying traditional Korean wrestling.

The final winner turned out to be Su-mei Tan, a Singaporean government official.

Giving her thoughts on her winning, she said, “I’ve realized that there are a lot to learn about Korea in Korea, although it is worthwhile to hone the language of Korean in my own country,” and added, “I will treasure this quiz for a long time. My stay in Korea was an unforgettable opportunity to touch and feel authentic Korean culture. More importantly, I grabbed a chance to broaden and deepen my understanding about Korea.”

An official at MOFA said, “We will make this quiz show as an annual event. The contestants who show a keen interest in Korea are playing a significant role in spreading the Korean wave Hallyu across the world. Likewise, we will keep promoting our public diplomacy through this event.”

The quiz show as a KBS special program was on air through KBS1 for local audiences and through KBS World for overseas viewers in over 100 countries on September 8.