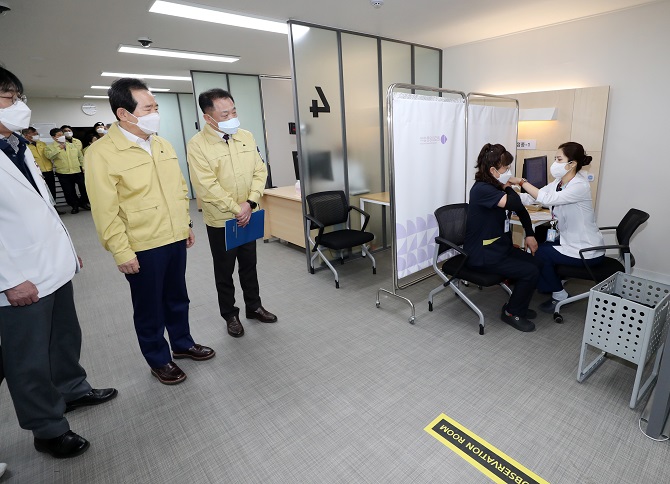 Chung Mi-kyeong (2nd from R), a sanitation worker of the National Medical Center, receives a Pfizer vaccine at the hospital in central Seoul on Feb. 27, 2021, while Prime Minister Chung Sye-kyun (2nd from L) looks on. She became the first South Korean to get the Pfizer product. (Yonhap)

SEOUL, Feb. 27 (Korea Bizwire) — About 18,500 people received a vaccination for COVID-19 in South Korea on the launch day of the nation’s public vaccination campaign against the pandemic, a government agency said Saturday.

According to the Central Disaster and Safety Countermeasure Headquarters, 18,489 people across the country got their first shots of the two-dose AstraZeneca vaccine Friday.

“On Friday, 18,489 medical workers, health care workers and nursing home patients received the AstraZeneca vaccine at community health centers and 213 nursing facilities in 17 metropolitan cities and provinces as planned,” said Jeon Hae-cheol, minister of the Interior and Safety, in an agency meeting.

The minister noted there have been no reports of specific adverse reactions from vaccine recipients, except for mild symptoms, such as headaches and fever.

The first day tally of vaccinations represents 6.39 percent of 289,480 health care workers and patients under 65 years of age who had agreed to the vaccination. It also accounts for 0.04 percent of the nation’s population of 52 million.

By region, Gyeonggi Province, which surrounds Seoul, accounted for 3,532 of the Day 1 vaccine recipients, followed by 3,072 in Gwangju and 1,922 in the capital.

In an effort to achieve herd immunity by November, health authorities said they will begin antibody testing for assessing immunity next month.

About 200 recipients will be selected for each vaccine product to determine whether they have an antibody after being vaccinated.

The administering of Pfizer’s vaccine also began at the National Medical Center in Seoul on Saturday.

The first shipment of 58,500 doses of Pfizer’s vaccine arrived in Korea on Friday and an additional 500,000 doses are due to arrive at the beginning of the third week of March.

About 300 medical and other workers — 199 from the National Medical Center and 101 from other hospitals specializing in the treatment of COVID-19 patients — are to receive the Pfizer vaccine.

The nation’s first recipient of the Pfizer vaccine was a 51-year-old sanitation worker of the National Medical Center, named Chung Mi-kyeong, who got the shot at 9:04 a.m., according to government officials.