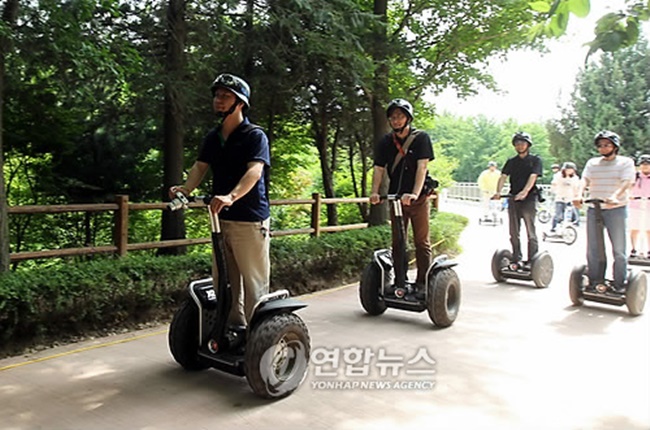 When the research center conducted a survey of 799 individuals who own at least one type of personal transport, nearly one in five said they either had a dispute with other people while riding or experienced an accident in the past. (Image: Yonhap)

SEOUL, May 24 (Korea Bizwire) – Accidents involving personal transport including scooters and Segways have nearly quadrupled over the past four years, according to recent information compiled by the Hyundai Insurance Research Center.

The statistics released yesterday, which were based on the insurance company’s database, revealed that the incidence of accidents increased over 300 percent, from 29 cases in 2012 to 137 cases last year, as growing interest in personal transport is seeing more people purchase and ride popular types of new vehicles in the market, including Segways, Ninebot electric unicycles, One Wheels and electric scooters.

When the research center conducted a survey of 799 individuals who own at least one type of personal transport, nearly one in five said they either had a dispute with other people while riding or experienced an accident in the past.

Among the accidents respondents experienced, four in ten cases were with a car, while nearly three in ten cases involved a bicycle.

The data also showed that nearly 11 percent of the accidents among personal transport operators resulted in severe injury, four times higher than the figure among car drivers.

The same trend was further emphasized when the figures regarding the value of insurance claims were broken down to users of each type of transport.

Against this backdrop, the lack of laws and policy concerning personal transport in the country is being brought to attention, which is leaving many drivers vulnerable in case of an accident.

Despite growing public interest, policies or guidelines for things as simple as which road to ride on have yet to be officially established, let alone insurance plans for personal transport riders.

“The emergence of a new type of transport can spark interest but also raise concern. We are being urged to establish new transport policies and insurance plans to create a safety net before it’s too late,” Lee Soo-il, a member of Hyundai Insurance’s research center said.