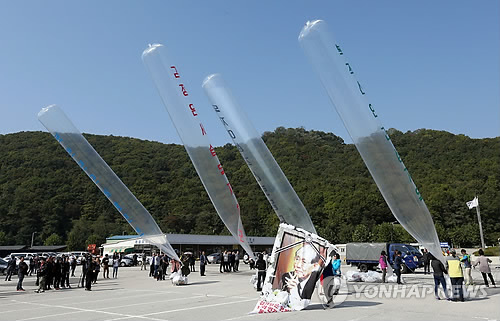 The anti-Pyongyang leaflet scattering has recently been at the center of tension between the two Koreas. (image: Yonhap)

SEOUL, March 24 (Korea Bizwire) – A leading anti-North Korean activist vowed Tuesday to continue his campaign to send leaflets critical of the communist country across the border despite bitter military threats from the North.

“Balloons (carrying anti-Pyongyang leaflets) that convey news from the outside are a kind of media to North Koreans, which should not be an object of any political negotiations,” Lee Min-bok, head of the Campaign for Helping North Korea in a Direct Way, said in an e-mail sent to journalists.

“Upon a favorable flow of wind, (the group) will scatter anti-North Korea leaflets any time,” said Lee, a North Korean defector. “We will never stop the leaflet campaigns until the North Korean regime allows North Koreans the freedom to use radio and the Internet.”

The North has repeatedly threatened to shoot down political leaflets flying from the South with cannons or missiles as the communist country considers such campaigns as threatening to its regime.

In October, Lee’s leaflet campaign led to North Korea firing gunshots into the South, escalating military tension along the border.

The anti-Pyongyang leaflet scattering has recently been at the center of tension between the two Koreas, which technically remain at war since the 1950-53 Korean War ended in a truce, not a peace treaty.