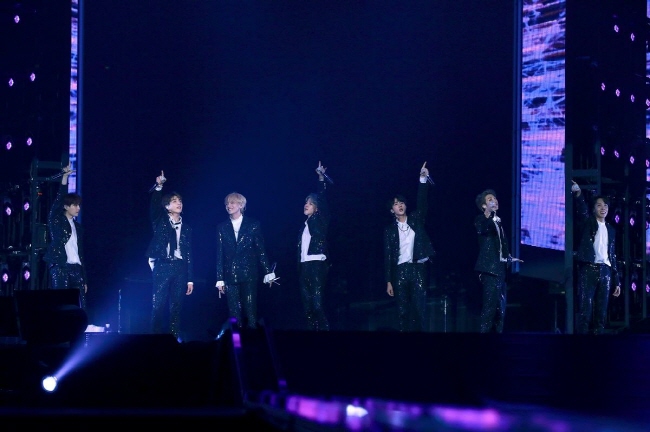 BTS performed live about 30 songs, including the Japanese version of “I Need You,” “Run” and “DNA,” during the “Love Yourself” concerts at the Tokyo Dome on Tuesday and Wednesday.

The group received an enthusiastic response from the fans for performing “Fake Love,” the title track off its latest Japanese single album “Fake Love/Airplane pt. 2″ for the first time on the stage, Big Hit Entertainment said.

Before the concerts, BTS was criticized by right-wing Japanese media due to a shirt member Jimin wore that had an image of an atomic bomb. On Wednesday, the agency released a statement of apology, saying it had no intention to hurt victims of the atomic bombs.

The venue of the shows was crowded with fans who came to support the band with no major protests by right-wing activities observed for the two days.

BTS will continue the tour of Japanese domes with the Osaka Kyocera Dome on Nov. 21, 23, 24, the Nagoya Dome on Jan. 12-13 and the Fukuoka Yahuoku! Dome on Feb. 16-17. All tickets for the remaining concerts in Japan have been sold out.