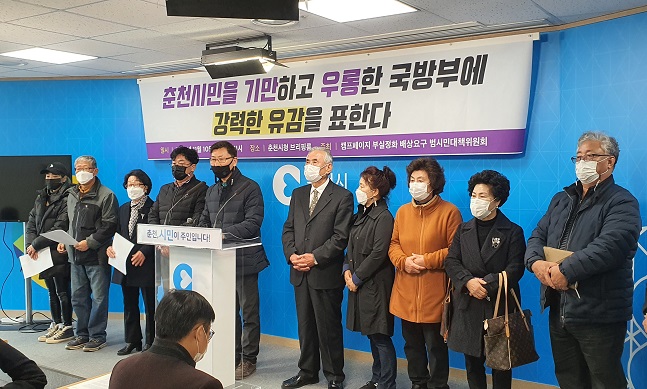 Civic activists hold a news conference in Chuncheon, northeastern South Korea, on Nov. 10, 2020, to call for a thorough environmental survey of a former USFK base. (Yonhap)

CHUNCHEON, Nov. 10 (Korea Bizwire) — Civic activists in Chuncheon on Tuesday called on authorities to conduct a sweeping environmental survey on the site of a former United States Forces Korea (USFK) base in the center of the Gangwon Province capital, after about 30 vacant drum cans were found buried there last month.

The activists said the recent discovery of massive drum cans on the former site of Camp Page in Chuncheon, about 90 kilometers east of Seoul, came after soil contamination more than six times the permissible level was detected there in May.

The excavation of over 30 20-liter drum cans presumed to have contained oil products on Oct. 27 has intensified public suspicion that the soil of the former Camp Page site may be contaminated with defoliants and other toxic chemicals.

“The problem of discarded drum cans is very serious because they were found in areas not designated by South Korean authorities as polluted zones,” said a civic group advocating for fair compensation over Camp Page soil contamination in a news conference at Chuncheon City Hall.

The South Korean government took over the site of Camp Page from the USFK in 2007, as part of a broad relocation scheme for USFK bases, and conducted soil purification work from 2009 to 2012.

During a cultural heritage field survey by the municipality of Chuncheon, however, extensive soil contamination was detected in parts of the site in May this year.

The civic group urged the defense ministry to carry out a sweeping reexamination of the entire site of the former USFK base to prove the land is safe from pollution.

It also asked the ministry to conduct thorough purification work on the soil before holding the USFK responsible for the contamination.