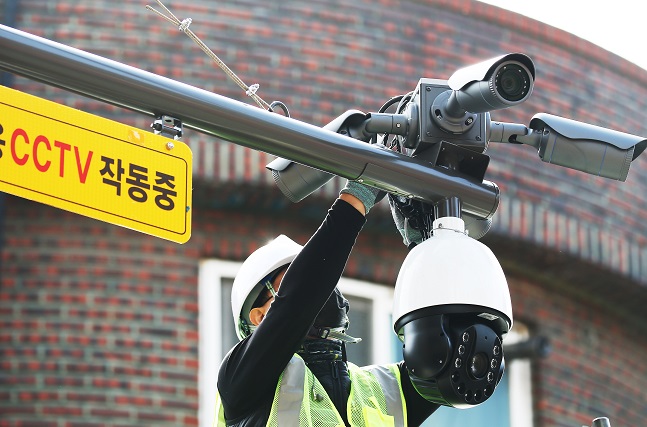 In this file photo taken on Oct. 13, 2020, an official sets up a surveillance camera in a village in Ansan, Gyeonggi Province. (Yonhap)

SEOUL, Nov. 4 (Korea Bizwire) — As the omnipresence of security cameras or closed-circuit television (CCTV) cameras is here to stay, the controversy over possible invasions of privacy is likely to linger.

Taking into account such rising worries over privacy invasion associated with CCTV cameras, a personal rights protection authority in South Korea announced it would develop an advanced face blurring system.

The Personal Information Protection Committee (PIPC) announced on Wednesday that it was set to develop ‘real-time masking’ technology to protect personal rights of individual citizens, a system designed to blur any sensitive information.

According to the PIPC, a total of 1.33 million CCTV cameras were installed and operated by public entities as of December of last year, with camera coverage expected to continue to grow in the coming years.

Surveillance cameras are often found in unexpected places that you casually pass by, so CCTV footage from such places includes a significant amount of sensitive information, raising the issue of privacy violation.

With CCTV cameras installed in public places capturing a variety of personal information, concern is growing over issues such as privacy violations.

The proposed real-time masking system can automatically detect an individual’s face or vehicle number in real time, and blurs this information so that it is not recorded or identified.