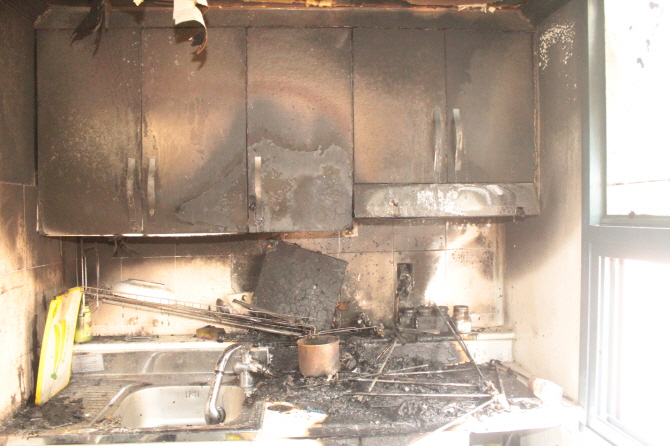 The fire broke out when the resident’s cat pressed the power button on an induction stove while the owner was out. (image: Gwangju Nambu Fire Station)

GWANGJU, Jul. 23 (Korea Bizwire) — A recent series of incidents in which pets left alone at home have started fires after pressing buttons on home appliances used for cooking.

A fire broke out in a studio apartment in Gwangju on Sunday at 11:07 a.m., according to Gwangju Nambu Fire Station.

There were no casualties, but 4 million won (US$3,400) in property damage was incurred to kitchen cabinets and appliances.

The fire broke out when the resident’s cat pressed the power button on an induction stove while the owner was out, according to the report.

A similar case occurred in a studio apartment in Busan, where a cat staying alone at home while the owner of the house was at work last Wednesday turned on the microwave.

The incident also ended up causing a fire.

According to fire authorities, more than 10 fires caused by pets are reported every year, including three in Gwangju over the past two years.

A fire department official said that households that raise pet animals should shut down all power sources such as microwaves and induction stoves when they go out.

The official further stressed that owners must not place combustible materials around cooking appliances just in case.