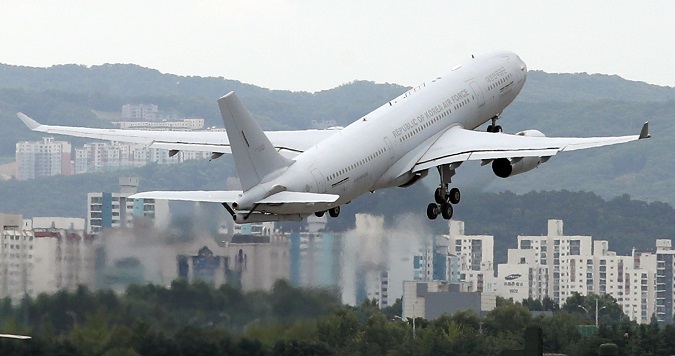 A multirole aerial tanker KC-330 departs from Seoul Air Base in Seongnam, south of the capital, on Aug. 14, 2021, carrying a special delegation to bring home the remains of a legendary Korean independence fighter, Hong Beom-do, from Kazakhstan. (Yonhap)

The KC-330 multirole aerial tanker departed from Seoul Air Base in Seongnam, south of the capital, with officials tasked with the repatriation aboard.

Led by Hwang Ki-chul, minister of patriot and veterans affairs, the team included Rep. Woo Won-shik of the ruling Democratic Party and Cho Jin-woong, an actor who starred in films on Korea’s fight for independence.

The remains will arrive in South Korea on the country’s Liberation Day, which falls on Sunday this year. 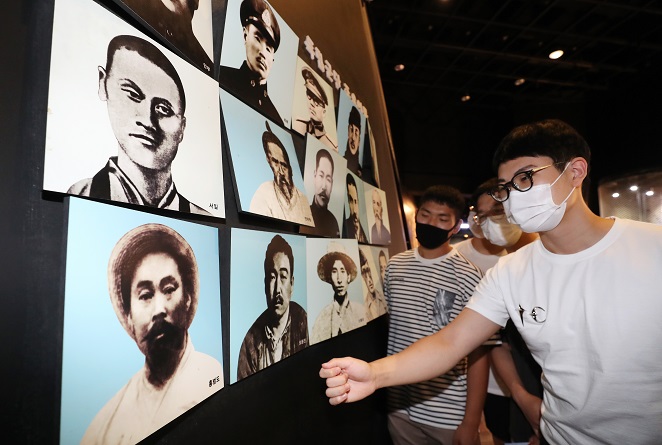 Visitors look at photos of Korean independence fighters including Hong Beom-do (L, 1st row) at the Independence Hall of Korea in Cheonan, 90 kilometers south of Seoul, on Aug. 13, 2021, two days ahead of the 76th anniversary of Korea’s liberation from the 1910-45 Japanese colonial rule of the Korean Peninsula. (Yonhap)

Born in 1868, Hong served as general commander of the Korean independence army during the 1910-45 Japanese colonial rule.

He is especially famous for the victory in the Battle of Fengwudong in Manchuria, China, in 1920, remembered as Korea’s first major victory against the Japanese colonial power.

Hong spent the rest of his life in the then Soviet Union, including his relocation to what is now Kazakhstan under then Soviet leader Stalin’s forced migration policy in 1937.

He died in 1943 at the age of 75, two years before Korea’s liberation from colonial rule.

Hong’s return was arranged on the occasion of Kazakh President Kassym-Jomart Tokayev’s state visit to South Korea next week for summit talks with President Moon Jae-in.

Tokayev had planned to make a trip here in March last year, but it was postponed due to the coronavirus situation.

The late general will be laid to rest at a national cemetery in the central city of Daejeon on Wednesday, following an official mourning period.