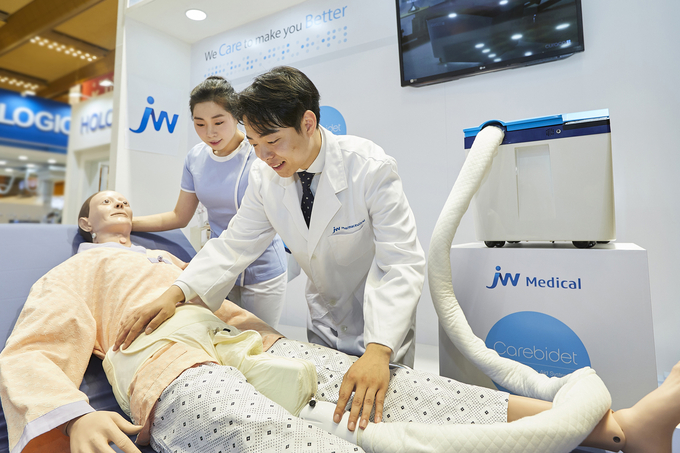 DAEJEON, Oct. 7 (Korea Bizwire) — With South Korea entering an aged society, the demand for rehabilitation aids or mobility assisting devices for the elderly is expected to grow.

According to the Korean Intellectual Property Office (KIPO) on Sunday, 686 patent applications for rehabilitation aids were filed in the five years from 2014 to 2018, up 69 percent from 406 in the previous five years, from 2009 to 2013.

Among them, the number of rehabilitation aids targeting older people more than doubled from 64 cases, or 16 percent, to 151, or 22 percent.

Looking at the applicants in greater detail, 46 percent, or 70 applications, were filed by universities and state-run research institutes, followed by 23 percent, or 35 applications, from small and medium-sized enterprises.

Looking at the latest patented technologies related to strokes, a typical disease in the elderly population, wearable rehabilitation devices are a case in point.

If the patient wears a glove on the non-paralyzed side and moves the joint, it measures the position of the glove and tracks the movement with a three-dimensional sensor to move the paralyzed side symmetrically.

Furthermore, there is a mobility assisting device for Parkinson’s disease.

When the patient wears head-mounted walking aids, the surrounding environment, including obstacles, is provided in front of the eyes as augmented reality, and the next foot position for walking is visually guided through a laser.

Meanwhile, various robot-type devices that support walking functions will also be developed either as wearables or as devices that can be ridden.

“South Korean industries related to rehabilitation aids should have a competitive edge in technology at a time when there is growing investment and interest in healthcare and related demand is surging,” said Kim Yong-jung, director of the Living Appliance Examination Division at the KIPO.