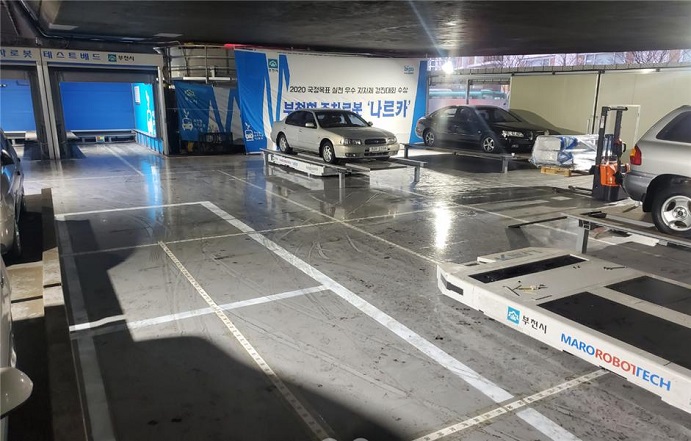 This photo provided by the Ministry of Trade, Industry and Energy shows a smart parking lot.

SEOUL, March 1 (Korea Bizwire) — The demonstration of a ‘smart parking robot’ that features a combination of artificial intelligence (AI) and robot technology is set to begin in a suburb of Seoul.

The opening ceremony for a smart parking lot was held on Friday in the city of Bucheon, Gyeonggi Province.

The parking lot was established to carry out the demonstration of a smart parking robot for which local robotics firm Marorobot Tech Co. received special regulatory approval in October last year.

The new smart parking lot offers significant efficiency gains compared to conventional ones with the number of cars that can be parked in a given area increasing by more than 30 percent, which the project’s proponents are hoping will help alleviate a shortage of parking spaces in urban areas.

Marorobot Tech plans to open the smart parking lot to the general public after first trialing the service with the vehicles of employees from the Wonmi Police Station in Bucheon.