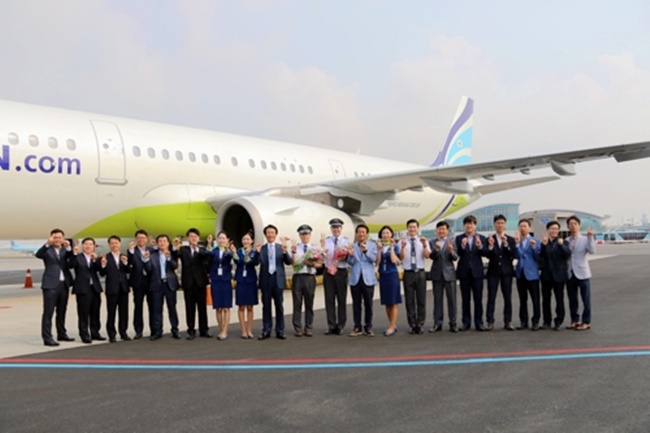 In this photo taken on June 1, 2017, and provided by Air Busan, Air Busan executives and employees stand before the company’s 20th leased aircraft at Gimhae International Airport. (Image: Yonhap)

SEOUL, June 1 (Korea Bizwire) – Air Busan, a South Korea budget carrier, has added one A321-200 aircraft to its fleet that will allow it to strengthen its customer service, the company said Thursday.

The low-cost carrier has leased a total of 20 passenger jets, including the latest 195-seat airplane, and plans to increase the number to 23 by the end of this year, Air Busan said in a statement.

The Busan-based airline has been aggressive in investing in its fleet and facilities, a move to stay ahead of other low-cost carriers in the highly competitive market.

Last week, Air Busan opened its new headquarters building in the southern port city to combine offices and training facilities that had been scattered across the city. It has become the first budget carrier to own its own corporate building.