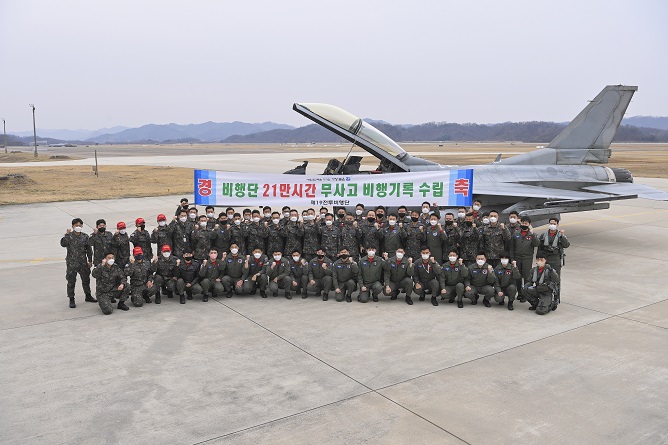 Shown in this photo released by the Air Force on March 28, 2022, are the service members of the 19th Fighter Wing in Chungju, 147 kilometers south of Seoul.

The 19th Fighter Wing in Chungju, 147 kilometers south of Seoul, posted the record after one of its fighters landed on its runway on March 18, the officials said. The unit operates KF-16 fighter jets.

It was the longest mishap-free record posted by all fighter wings under the service branch.

From 2007 through this month, the unit logged a total flight distance of 135 million kilometers, equivalent to traveling between the Earth and the moon 176 times.

“The record was made possible on the back of commitment made by all former service members, support crew and troops of the flight wing,” Air Force Chief of Staff Gen. Park In-ho said during a commemoration ceremony.

Launched in 1991, the fighter wing has carried out various air defense missions, including tactical operations around the Korean Air Defense Identification Zone (KADIZ) in 2019.