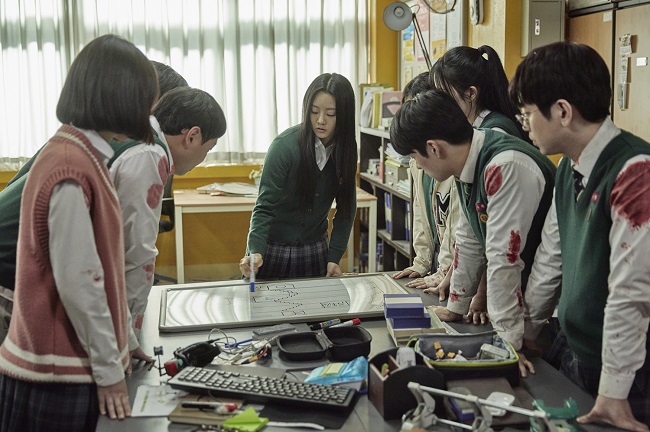 This image provided by Netflix shows a scene from “All of Us Are Dead.”

SEOUL, Feb. 7 (Korea Bizwire) — The director of the latest coming-of-age thriller “All of Us Are Dead” said Monday his first Netflix series is not simply a zombie apocalypse but also a lifelike portrayal of human society with people from all walks of life.

Based on a popular webtoon, “All of Us Are Dead” is set at a high school plunged into chaos due to a mysterious zombie virus.

A group of students stage all-out battles against the zombies, formerly their friends and teachers, while no police and other adults come to rescue them.

“To be honest, I didn’t enjoy zombie shows or films. But the original comic caught my eye, as it depicts a zombie outbreak at a school,” director Lee Jae-kyoo, also known as Lee JQ, said in an online media interview.

In the face of death, teenagers can become more radical, impatient or short tempered, but at the same time, they can be more passionate than grown-ups, he said.

On-jo (Park Ji-hu) keeps holding the hand of her best friend, who is already infected with the virus, while others do not bother to force out friends-turned-zombies.

Cheong-san (Yoon Chan-young) is a smart boy who first assesses the situation, saying something like “Train to Busan” befalls his school, and tries to lead survivors to safer places. 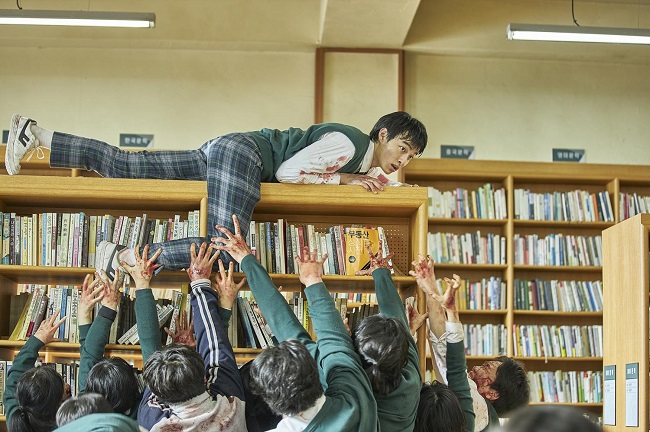 This image provided by Netflix shows a scene from “All of Us Are Dead.”

Lee, who helmed hit South Korean TV series like the historical romance “Damo” (2003) and the romance “Beethoven Virus” (2008), said he wants to portray the school in “All of Us Are Dead” as a kind of microcosm of human society, with a variety of people in school uniforms, like bullies and victims, rich and poor kids, head boys and mean girls.

“There is a saying that children are mirrors of their parents,” he said. “It can be expanded to another saying that school is a mirror of society. I want to show this parallel image through students.”

Along with the full-scale war against the zombies, school violence is another main theme of the story in the 12-episode Netflix series. The mysterious zombie virus was developed by a teacher to help his son against school bullies.

The director said he is aware of the criticism of the drama’s detailed description of school violence and excessive use of profanity.

“Many people feel uncomfortable seeing school bullying and want to distance themselves from it,” he said. “But our society may not be that different from schools. We can become a perpetrator or a victim with or without realizing it.” 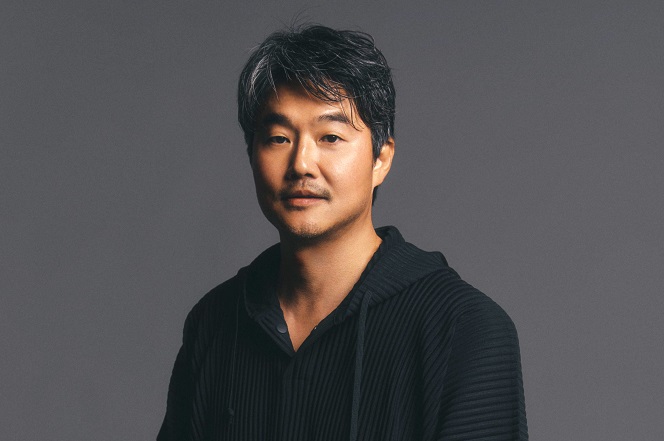 Director Lee Jae-kyoo of “All of Us Are Dead” in this photo provided by Netflix.

The series has been making waves on Netflix since its debut on Jan. 28 while being hailed as a new “Squid Game.”

It became the fourth Korean-language series that has topped the Netflix’s weekly official chart for non-English TV series following “Squid Game,” “Hellbound” and “The Silent Sea.”

According to data by streaming analytics firm Flixpatrol, the 12-part TV show has been atop the top Netflix TV show chart for nine consecutive days since its first entry on Jan. 29.

It was Lee’s first small screen project in 10 years after the romance “The King 2 Hearts” (2012). He directed a couple of films over the period, including the historical thriller “The Fatal Encounter” (2014) and the comedy drama “Intimate Strangers” (2018).

The director said he already has the next story in mind, although the second season is not yet confirmed.

“If the first season keeps going well for a longer while, the next season can be discussed, I think,” he said. “I presented the story of human struggle to survive in the first season. In the next one, I want to tell stories of zombies.”