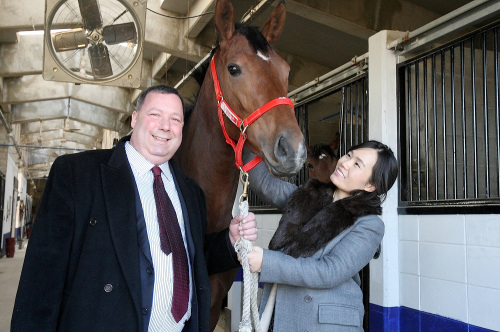 To be recognized as a racehorse owner by the KRA is not an easy task. To meet the lowest standard, individual applicants have to have an annual income of at least 100 million won (US$ 91,000) for two years in a row. One also has to pay an average of 4 million won (US$ 3,600) in property tax for two consecutive years.

The KRA has been making efforts to broaden its operations, and encourage international participation. The KRA recently eased its entry requirements in a bid to accept non-Korean members as racehorse owners. Dallao soon managed to meet the required standard, and became the first non-Korean member of the KRA.

Dallao, an American who first came to Korea as a US Army officer in 1981, said that he sees racehorses as a good investment asset. Dallao explained that as business managers, racehorse owners and business owners have a lot in common, as racehorse owners have to identify and train talented race horses, and have to obtain good results in races, just as any good business person has to identify good assets and stick with them to see profits.