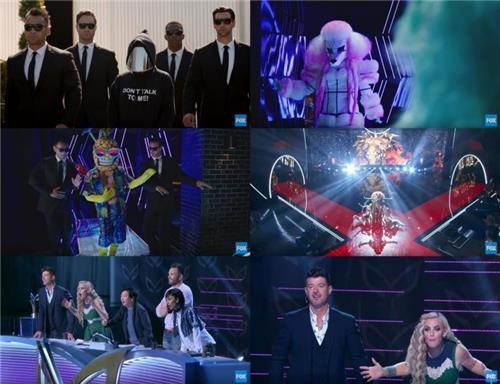 A compilation of scenes from the American version of “King of Mask Singer” in this image. (image: MBC)

The trailer of the remake has garnered nearly 500,000 views since it was unveiled Thursday on YouTube. The remake, “The Masked Singer,” is set to premiere on FOX in January next year.

In the trailer, each mysterious celebrity singer adorns more outrageous costumes than the Korean original show, and the host Nick Cannon and panels, including Ken Jeong, Nicole Scherzinger, Robin Thicke and Jenny McCarthy, are being shown dumbfounded by the amazing performances by the singers whose true identities are hidden behind the masks.

The program premiered in April 2015 in Korea, and the format has been sold to seven countries, including Thailand, China and India. It is the network’s first program format export to the U.S.