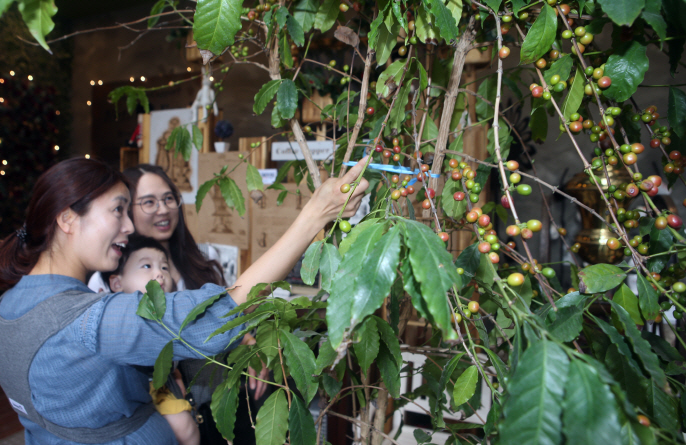 In order to grow coffee, the temperature must be maintained between 4 and 5 degrees Celsius in winter, which requires a lot of energy. (Yonhap)

SEOUL, Jun. 3 (Korea Bizwire) — Coffee, which has emerged as the de facto “national beverage,” has to be imported almost all of the time, but it is expected that one day Koreans will taste brews from domestic beans.

The Rural Development Administration (RDA) announced on Sunday that it will conduct a study titled “Arabica Coffee Selection and Redistribution Technology for Low Temperature Adaptability” until 2022 to develop high-quality domestic coffee that can withstand the cold winter weather in South Korea.

The RDA reported that it is time for research to replace imports as the size of the domestic coffee market has grown.

Coffee has grown beyond simply a beverage to be consumed on occasion, and the need for the nation to conduct research has grown.

South Korea has relied on imported coffee as it is difficult to meet the conditions for growth and development because coffee beans typically grow in an environment where there are no frosts and strong winds, and with temperatures between 5 and 30 degrees Celsius.

Some farms in Gyeonggi, South Jeolla, North Jeolla and Jeju provinces are already growing small amounts of coffee for tourism, processing and sales.

However, the RDA stressed that in order to grow coffee, the temperature must be maintained between 4 and 5 degrees Celsius in winter, which requires a lot of energy.

As a result, the RDA has planted a total of 19 varieties of coffee on Jeju Island, and is studying which breeds are suitable for Korea’s climate.

In addition, the administration is pushing for a project to secure coffee genetic resources.

According to Kim Kyung-kyu, head of the RDA, the Jeju test is key to developing coffee varieties that can withstand cold temperatures and creating suitable facilities for coffee cultivation.