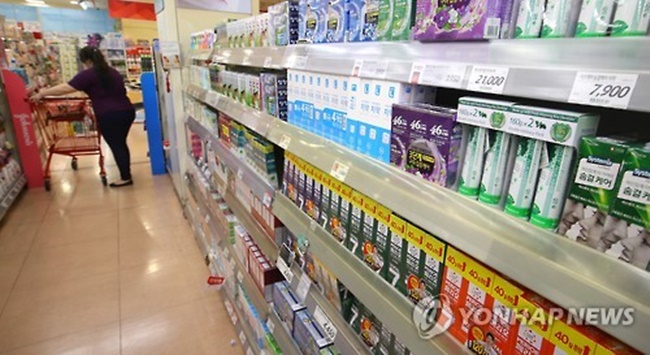 Net income came to 17.3 billion won (US$16.17 million) in the October-December period, compared with 73 billion won the previous year, the company said in a regulatory filing. (Image: Yonhap)

Net income came to 17.3 billion won (US$16.17 million) in the October-December period, compared with 73 billion won the previous year, the company said in a regulatory filing.

The company attributed the poor performance to the decrease in inbound tourists from China, which followed the Beijing government’s ban on sales of Korea-bound package tours, since mid-March amid a diplomatic row over the deployment of a U.S. missile defense system here.

AmorePacific said it logged a net profit of 398 billion won last year, down 38.4 percent on-year. Operating income was down 29.7 percent to 596.4 billion won and sales were 5.12 trillion won, declining 9.2 percent from a year earlier.

The combined net income of AmorePacific Group, which includes smaller brands like Innisfree and Etude, reached 20.9 billion won in the fourth quarter, down 76.2 percent from a year ago. Total operating profit was down 32.8 percent to 90.3 billion won, and sales were down 14.2 percent on-year to 1.34 trillion won.

AmorePacific said it will accelerate its overseas push to improve its earnings this year.

Shares of AmorePacific were trading at 303,000 won as of 2:14 p.m., down 2.1 percent from the previous session’s close. The earnings results were released during trading hours.