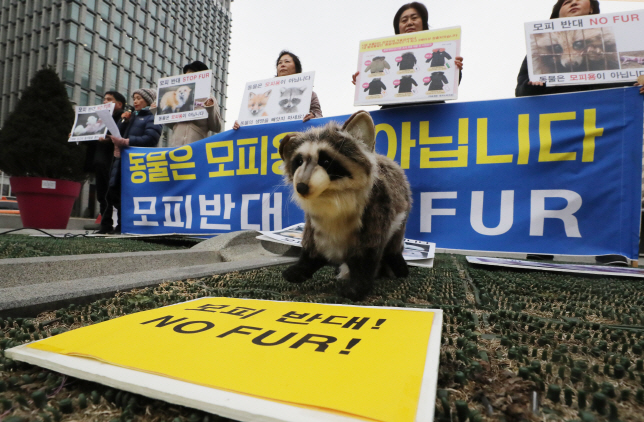 South Korean animal rights activists hold a news conference denouncing the killing of animals for their fur in downtown Seoul on Dec. 9, 2019. (Yonhap)

SEOUL, Dec. 10 (Korea Bizwire) — An animal protection group is urging the fashion industry to stop production of fur clothing as it is “no more than a symbol of shame and disgrace.”

The Korea Association for Animal Protection held a press conference on Monday at Gwanghwamun Square, arguing that more than 10 million wild animals are killed for fur production every year.

“Hundreds of wild animals are being killed for a single fur coat,” they said.

The group claimed that animals at fur farms are locked up in tiny cells barely able to move, describing the use of fur in clothing as the “worst case of animal abuse.”

They also claimed that fur may pose a health risk as they referred to a recent report from the Korea Consumer Agency that natural fur featured on a number of children’s winter coats contained an excessive amount of toxic material.

Formaldehyde, a material used to process animal fur, is known to cause skin inflammations when inhaled or upon contact with the skin.

“The lack of public awareness is resulting in higher demand for fur,” they said. “We have to tell the world about the truth of animal abuse caused by fur production.”