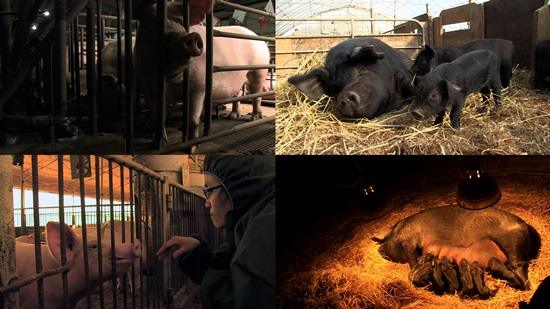 SEOUL, Apr. 24 (Korea Bizwire) — A Korean documentary film called ‘An Omnivorous Family’s Dilemma,’ about animal rights issues such as massive factory farming, will be released on May 7.

Hwang Yoon, the film’s director, said at a Yongsan CGV pre-screening on April 22 that she wanted to show how humans can be cruel to animals, whether they’re vegetarian or not.

The film starts with the director and her family’s journey to witness the birth of a pig family at a factory farm in Korea. The family witnesses the sow desperately hiding her young when the factory owner comes to have the males neutered.

The documentary also shows footage of both the sow and the director’s own child giving birth. The family eventually witnesses the slaughter of the pig family.

While shooting the documentary, Hwang became a pesco-vegetarian. Although her husband did not fully understand her choice initially, he is slowly accepting her as a vegetarian, said the director. Her young son, after participating in the film, has also decided to be a vegetarian.