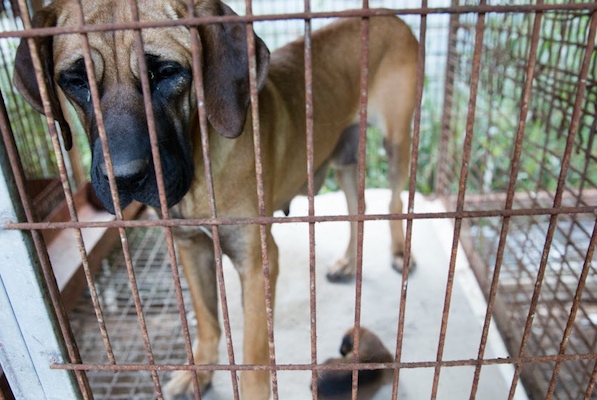 SEOUL, Sept. 18 (Korea Bizwire) – A total of 160 dogs destined to be slaughtered and traded as meat have found safe haven in the United States with help from animal rights groups. Of note, 57 dogs were rescued on the verge of their slaughter.

Humane Society International (HSI), an international animal protection group, announced it successfully persuaded a dog farm owner surnamed Kim to give up his animals, and saved 103 dogs doomed to be slaughtered. Kim promised to transform his farm into a rice field, and send his dogs to the United States for adoption.

Kelly O’Meara, director of companion animals at HSI said, “The first time we saw the dogs, it was really shocking. They were clearly terrified, but once they realized we weren’t there to hurt them, their tails started wagging, eager for the slightest show of affection.”

“They have so much love to give. It’s appalling to think they were destined to be butchered for their meat. These dogs are going to make wonderful canine companions. Rescuing them and getting to know their personalities makes us even more determined to end the cruel dog meat trade.”

Earlier in March, HSI helped Change for Animals Foundation (CFAF) to adopt 57 dogs for animal lovers in California. The dogs, including Japanese tosas, beagles and poodles, were on the verge of being slaughtered for their meat. The farm owner has since started cultivating peppers instead.

Recently, the Ministry of Environment released statistics saying that there are approximately 17,000 dog farms breeding a total of two million dogs for meat in Korea.

HSI is currently contacting other farms to save dogs being bred for meat, and plans to launch public awareness campaigns to encourage South Koreans to think differently about “meat dogs,” which are no different from pet dogs.

In addition, it will keep pressing the Korean government to ban restaurants from serving dog meat, as well as the breeding and trading of dogs for meat.