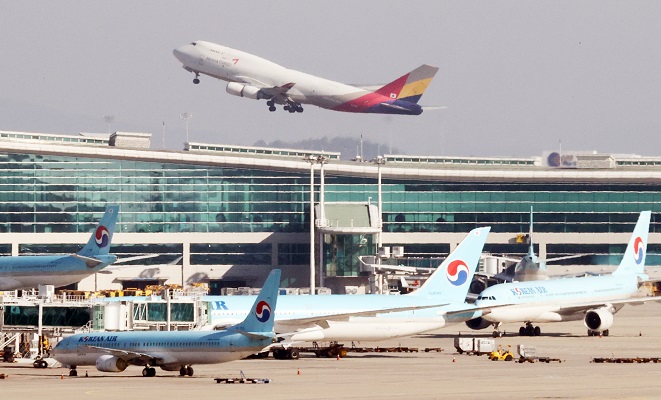 This photo taken on Dec. 1, 2020, shows an Asiana passenger jet taking off from the Incheon International Airport against the background of Korean Air planes in Incheon, just west of Seoul. (Yonhap)

SEOUL, Dec. 14 (Korea Bizwire) — After going through a tough battle to survive this year due to the spread of the COVID-19 pandemic, South Korea’s airline industry is expected to have another gloomy year in 2021.

South Korea’s top flag carrier Korean Air Lines Co. and No. 2 carrier Asiana Airlines Inc. are in the final stages of reviewing their 2021 business plans based on the assumption that next year’s demand for international flights will remain the same as this year’s.

Korean Air, for example, decided to operate only 35 of its 110 international routes in the first two months of next year.

This is similar to the ratio seen early this year when the airline operated only 30 percent of its international routes due to the onset of the coronavirus pandemic.

Korean Air is not alone. Asiana also decided to operate only 26 out of its 72 international routes in the January-February period of next year.

Local airlines launched international sightseeing flights from the middle of this year as part of efforts to boost their sales. These flights, however, are also facing delays or cancellations due to the spread of COVID-19. 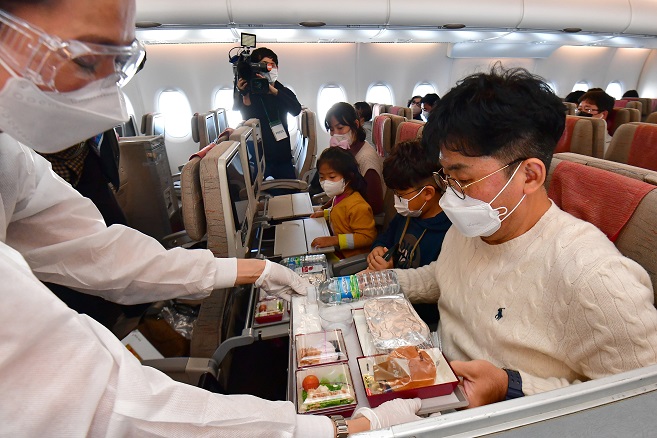 This photo, provided by the Incheon International Airport press pool, shows a flight attendant serving an in-flight meal on an Asiana Airlines flight to nowhere on Oct. 24, 2020.

“The strong air cargo demand played a key role for local airlines to achieve profits in the second and third quarter of this year despite the COVID-19 pandemic,” an industry expert said.

“However, it remains uncertain if air cargo demand will continue a bullish trend next year.”

Korean Air and Asiana succeeded in grabbing a larger share in the air cargo market this year by swiftly expanding their air cargo services as a way to cope with the decline in passenger traffic.

However, chances are high that they will face stiffer competition from other global airlines which are likely to take aggressive steps to increase their presence in the air cargo market.

Against this backdrop, COVID-19 vaccines that are scheduled to be distributed from the latter half of next year are expected to be the only means for local airlines to get back on their feet again.